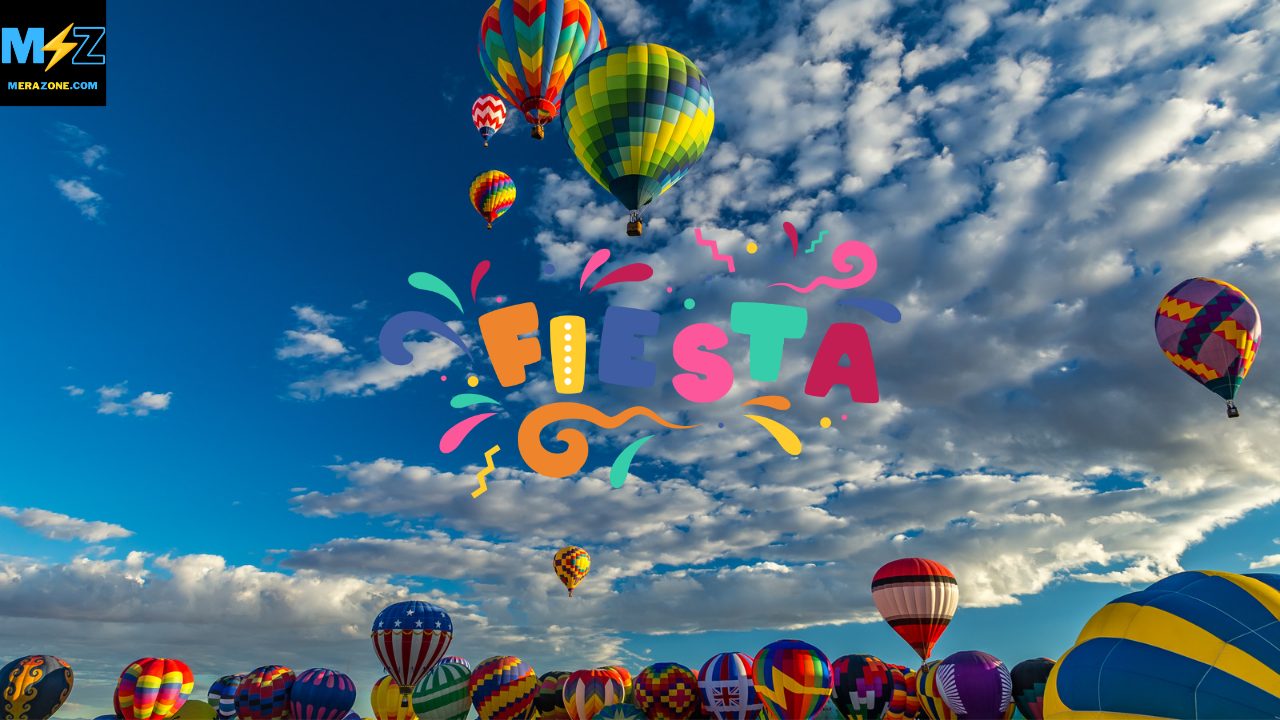 The event is the largest hot air balloon festival in the world since more than 500 hot air balloons appear during this festival each year, it is followed by the Grand Est Mondial Air in France.

It is also the most photographed event in the world and the largest annual international event held in the United States. And it plays a key role in tourism for the city of Albuquerque.

The Balloon Fiesta began in 1972 as the culmination of a celebration of 770 KOB Radio’s 50th anniversary. Radio station manager Dick McKee asked Sid Cutter, owner of Cutter Flying Service and the first person to own a hot air balloon in New Mexico, if KOB could use his new hot air balloon as part of the festivities. Then, after a long discussion, the first fiesta ended with a gathering of 13 balloons on April 8, 1972, sponsored by KOB. The first event was held in the Coronado Center mall parking lot with 20,000 spectators and balloonists from Arizona, California, Iowa, Michigan, Minnesota, Nevada and Texas.

In 1978, the event became so popular that it received 273 entries, and over the years the number of balloons has steadily increased over time. In 2000, over 1,000 balloons were registered for the Balloon Fiesta. There is now a cap on the number of balloons that can participate as landing site availability is limited. In 1993 and 1999, the Albuquerque International Balloon Fiesta also hosted the annual Gordon Bennett Cup. For those unfamiliar, the Gordon Bennett Cup is the oldest and most prestigious gas balloon race in the world.

On any given day during the festival, up to 100,000 spectators may be on the pitch at cinaoarison at the first fiesta was watched by around 10,000 people. They also have the rare opportunity to observe the inflation and take-off procedures. Countless people gather at landing sites all over the city to watch the incoming balloons that couldn’t make it to the main event and this show is also very popular on television.

In 2017 Balloon Fiesta Live! was launched, allowing fans to stream the event live. This professionally produced live stream features expert commentary of all flight events. The number of other unique events during this festival has also added to its popularity and these events have become many important parts of this festival, especially among families.

Balloon Fiesta Park, from which the balloons are launched, is located on the northern outskirts of the city. The park is a multipurpose field and hosts many other events throughout the year. In 2005, the Anderson-Abruzzo Albuquerque International Balloon Museum was opened on the grounds. The museum is dedicated to the history, science, sport and art of hot air ballooning and other innovative forms of flight. The entire complex now extends over more than 350 acres in area.

The convention has also become a major showcase of New Mexico culture and history and features numerous cultural exhibits. The party is one of Albuquerque’s biggest tourist attractions and a major source of revenue and livelihood for the city and local businesses. Albuquerque also has the most resident balloonists with over 300 people, so this is very important to how they are paid.

As a rule, tourists and visitors to the fiesta take thousands of photos of the balloons, so it is not surprising that for several years the fiesta has been sponsored by Kodak and given the title of Kodak Albuquerque International Balloon Fiesta , although this title is generally only used in print advertisements and on official memorabilia. After Kodak left the project, the event was sponsored by Canon, a Japanese camera and imaging company in 2018, which in itself shows how important this event is for photography.

Along with all these factors, it is finally a celebration of hot air balloons with various competitions that provides a platform for all balloonists in the country to show off their talent and win prizes. For the public, this event is a great source of entertainment and leisure in which they like to ride in hot air balloons and also enjoy their time while enjoying many events rather than hot air balloon events, such as chainsaw carving , skydiving and fireworks that cater to other interests . All in all, it also gives a fun experience watching those beautiful and giant hot air balloons in the sky.

The Dawn Patrol is a very important part of the festival which began at the Balloon Fiesta in 1978, when two Californian balloonists developed positional lighting systems that allowed them to fly at night. Dawn Patrol pilots take off before sunrise and fly until it is light enough to see the landing sites. Other balloonists like the Dawn Patrol because they can observe the balloons and get a first idea of ​​the wind speed and direction at different altitudes.

Mass Ascension is another of the party’s biggest events, where all participating balloons launch in two waves, filling the sky with hundreds of balloons at once. Launch directors, also known as ‘zebras’ because of their black and white striped outfits, serve as ‘traffic cops’, coordinating the launch so the balls leave the field in a safe and coordinated manner .

Many non-traditional and uniquely shaped balloons are launched at the same time. Some of the most famous shapes include a milk cow, wagon, twin bees and many more like soda cans and animals. All this gives a very nice view to the spectators who can see balloons of different shapes and sizes, which provides a majestic experience. Many local artists use balloons as a favorite subject for their paintings.

Many balloons are lit at night by their propane burners. They stay static and don’t take off during these events and it’s called “Balloon Glows”. The “Glowdeo” is a night glow for specially shaped balloons. Evening balloon glow is often followed by fireworks.

1. When is the Albuquerque International Balloon Fiesta celebrated?

2. How much does it cost to go to the Albuquerque International Balloon Fiesta?

It costs $10 per person for general admission to the Albuquerque International Balloon Fiesta, children 12 and under can enter for free.

3. What time do balloons go up at the Albuquerque International Balloon Fiesta?

They go up at 7 o’clock in the morning.