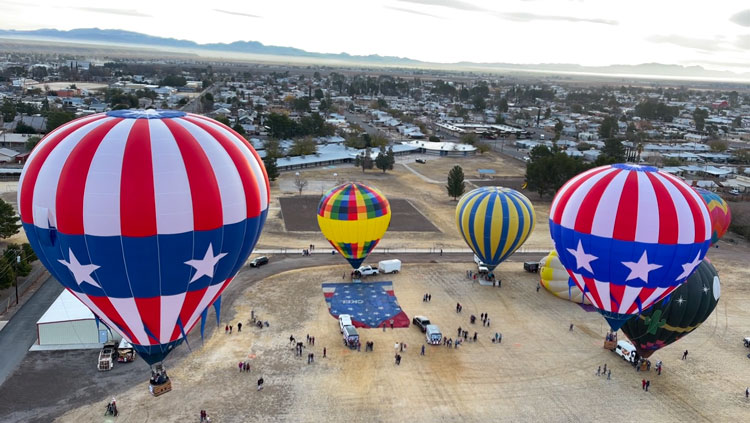 “We have been doing this for several years. We plan to continue to do so.

SAFFORD – On a crisp winter morning in late December 2021, 13 balloons took off from a field at Ruth Powell Elementary School in what was the initial and ultimately final flight of the Valley New Year’s Balloon Show. Gila 2021. Now a local hot air balloon company is looking to make sure it won’t be the only flight.

The event, organized by the Graham County Chamber of Commerce, drew 20 hot air balloon pilots to the Gila Valley. Unfortunately, weather limited hot air balloon rides to this maiden voyage, and the extravaganza was not a financial success.


The extravaganza was born from the minds of Greg and Susan Lindsey of AZ Air Ventureswhich launched the Safford Balloon Extravaganza over the 2020/21 New Years weekend.

“For the past few years, a few of our pilot friends have been coming over the holiday weekend and flying with us. Two years ago we decided to expand the event and create the Safford Balloon Extravaganza by inviting a few more friends,” said Susan Lindsey.

The first Safford Balloon Extravaganza brought seven pilots to the Gila Valley who traveled from Utah, Colorado, New Mexico and Indiana with their families and crews. The group came together to enjoy the Arizona sun and fly community members who wanted to come and help the crew. “We had excellent weather and flew all four days and were also able to put on a balloon glow drive for the community along 20th Avenue. The pilots loved it and plan to continue the tradition of coming to the New Year,” Greg Lindsey said.

After the first event, several community members and some city council members who were thrilled to see so many balloons in the valley began contacting the Lindseys who were excited about the balloons coming to the valley. According to the Lindseys, they were interested in what it would take to make it a bigger annual event, similar to the ones currently held at Pinetop/Lakeside or Lake Havasu. The Graham County Chamber also wanted to support and grow the Extravaganza, as they saw the value in creating a large community event. As planning for the 2021-2022 event progressed, the name was changed from Safford Balloon Extravaganza to The Gila Valley Balloon Extravaganza and New Year’s Eve Block Party with plans to involve the Gila Valley as much as possible. The idea was to create a large New Year’s Eve party on 14th Avenue, including a band, vendors, and a balloon glow that could provide a great community event as well as a revenue stream to help offset the costs.

The Lindseys served as balloon masters coordinating incoming pilots and event balloon details while the Chamber coordinated the surrounding event, including planning the block party, coordinating vendors, seeking sponsorships and community support. The Chamber ran into obstacles trying to coordinate the block party, so instead of a party, a New Year’s glow was scheduled for the Mt. Graham golf course and a glow at the Pima rodeo grounds was also planned.

On the 2021-2022 Extravaganza weekend, 20 pilots and approximately 75 crew members traveled to the Gila Valley from Utah, Colorado, New Mexico, California and Arizona. Unfortunately, a terrible multi-day rainstorm also occurred this weekend. On the first day of the event, all pilots flew from Safford landing across the valley, one to Klondike Road. Each of the following days, rain, winds and muddy conditions even prevented the balloons from inflating. On Saturday night, the rain stopped enough to allow pilots to climb the chandelier where they set down their baskets and lit their burners for the community in the Home Depot parking lot.

Following the event, in January, plans were put in place to continue the event for the 2022-2023 New Year’s weekend and possibly even expand it to 30 drivers. As the year progressed, the Lindseys secured commitments from pilots who all planned to return, and they formed a waiting list of more pilots who hoped to be invited if the event grew. After the January meeting, meetings resumed in August where the Chamber shared plans for the event which included an already booked group and a downtown New Year’s Eve block party. After two meetings in August , the Lindseys received an email from the House Manager informing them that the Extravaganza had been canceled indefinitely.

According to a news release, Graham County Chamber of Commerce Executive Director Vance Bryce recently recommended to the chamber’s events and finance committees that the chamber stop hosting the extravaganza.

In a press release, the Chamber said that while about $11,240 in revenue came from sponsors and product sales, expenses totaled about $39,169, leaving a deficit of about $27,927. According to the press release, the communication strategy of the sponsors of the Chamber, the contracts of the suppliers and the financing plan were not sufficient to ensure the success of the event.

“The business model hasn’t worked,” said chamber board chairman Reed Richins. “We can’t have events that lose that much money. I’m sure Vance is learning some hard lessons and changing the way we do business.

The statement said the Board of Directors and Chamber staff are disappointed but understand the decision to stop sponsoring the event.

“I’m definitely learning a lot about where I failed leading this team,” Bryce said. “I didn’t have a plan B for the bad weather and I didn’t understand how much I had underfunded the event. It was clear to me that the model we were using to pay for the event was seriously flawed and that I had to recommend stopping our event. A freshman event is always tough when it comes to paying all the bills, and we expected to make an investment the first time around, but not such a large investment. I was unable to come up with a plan that would be different enough from the first year to make a difference and justify holding the event a second year.

The Chamber said it would implement procedural changes to create more sustainable events and include a “significantly more robust budgeting process, an improved sponsor communications plan, clear and binding vendor contracts and incentives for all chamber staff to fundraise to create amazing events for everyone in the Gila Valley and beyond.

For the Lindseys, the goal of the Extravaganza has always been to draw people to the Gila Valley and share the joy of hot air ballooning with the community and neighboring communities. “We were thrilled when the Chamber got involved, as the goal was also to increase tourism while creating a fun event for our community,” said Susan Lindsey.

While the Lindseys are disappointed by the House’s last-minute notice withdrawing their support, they have no intention of letting the Extravaganza die. “We have been doing this for several years. We plan to continue to do so,” said Greg Lindsey.

In order for this to continue as a community event, the Lindseys are looking for sponsors for the event. “We need to provide our pilots with hotel rooms and propane so they can fly and shine. It takes some investment from the community,” said Greg Lindsey.

The Lindseys hope the Gila Valley can create an event that will encourage local residents to stay in town for the holiday weekend by giving them something fun to do, but also draw large crowds to the valley. Gila.

“The Pinetop/Lakeside event sells out its local hotels three months before its event,” said Susan Lindsey. “They attract people from all over Arizona. The Gila Valley community has the option of creating a community event like a New Year’s block party and including balloons among the attractions, but it has to be something the local municipalities want to do. We want to help by involving balloons in an event like this. The Lindseys travel to similar events in small communities everywhere. “We know what this can do for small communities,” Susan said.

“We are very disappointed with the last minute notice, but our crew got together last night, and they all want to help the pilots get back to the Gila Valley for the Extravaganza,” said Susan Lindsey. Regarding the amount of money reported as lost by the Chamber, the Lindseys said they had no comment as they were not involved in what the Chamber spent or the money they have reported. They mentioned that not all sponsorships seemed to be sold. The Lindseys said they needed to find sponsors to bring the balls back, but they certainly didn’t need as much money as the House reported. Sponsorships include hot air balloon rides as well as advertising options including social media and banners, so anyone interested in helping to make this event a success can contact Greg or Susan Lindsey at [email protected] “We just want to help make the Gila Valley a great place to visit and live,” they added.

The mission of the Graham County Chamber of Commerce is to improve the quality of life for everyone in the Gila Valley through connection, leadership and tourism. The Chamber and Safford Lions Club will host the popular SalsaFest on September 23-24 at Firemen’s Park in Safford in front of the Town Hall.