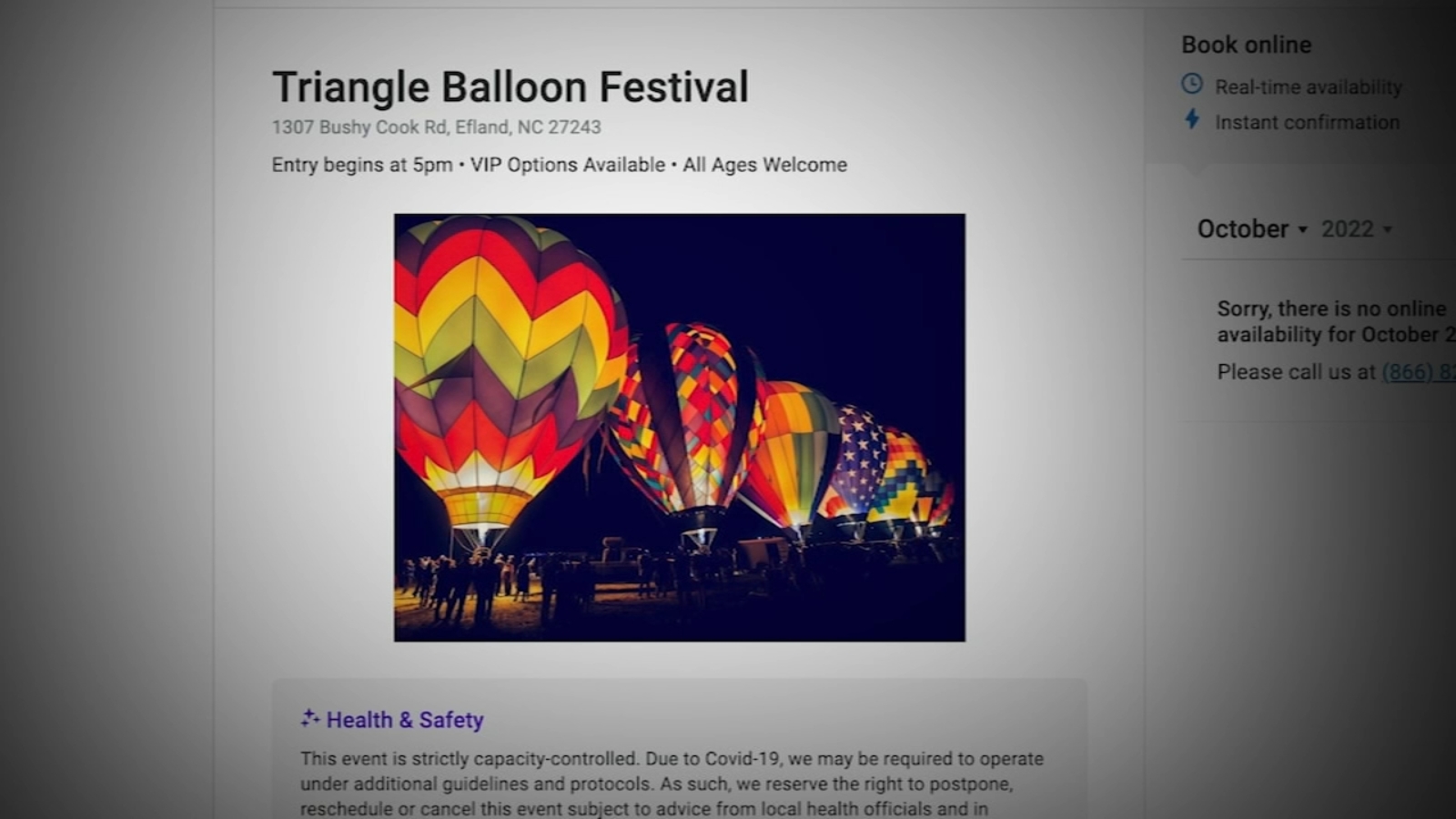 Deflated dream | Ticket holders left empty-handed after the Balloon Glow tour was canceled at the last minute; does not respond to refund request

Some ticket holders have been left empty-handed and wondering if they will get their money back after a hot air balloon festival was canceled without notice.

The festival has been advertised for months on

Tyrone Sanders tells ABC11: “I saw it on Facebook and I thought, I want to go this year, because I’ve always wanted to go every year, but I’ve never been. I So decided to go this year and signed up, and got the tickets.”

Sanders said he paid nearly a hundred dollars for tickets and a parking pass for the September event hosted by Balloon Glow Tour.

“They canceled that and said oh, we’re going to move it to October, end of October.”

On the Facebook events page, it was posted: “The Meridian Community Foundation park will not be ready in time for this weekend. The new dates for the event are October 21-23, 2022. All tickets are automatically switched to the new dates. If the new dates don’t suit you, message us directly (or email [email protected]) with your order number, name and email address of the person who booked to receive full credit.”

Sanders was okay with the new date, so last weekend he drove from his home in Smithfield to the advertised location in Efland.

“I’m like literally stepping out of the exit, I’m like, I can’t see anything in the air. I’m like what’s going on and so I was getting a little worried. I got to the exact spot which was on the tickets and nothing was there, nothing even looked like an event was about to happen.

Instead, Sanders was greeted by a sign in what appeared to be a house that said no festivals were taking place here. He then texted and emailed the company and asked for a refund. Sanders said he hasn’t heard from anyone yet.

Sanders isn’t alone, ABC11 Troubleshooter Diane Wilson has heard from several other ticket holders. Many said, as did Sanders, that they showed up at the event address to learn there was no hot air balloon festival. They also said they had requested a refund and had yet to receive a response.

ABC11 was able to get in touch with The Balloon Glow Tours organizer Richard Garvie who said: “A notification has been sent to all guests with tickets that the event has been rescheduled again and we have posted on our page. Facebook at least 36 hours before the event that the event has been postponed. We are aware that some of these emails may have gone to spam, but the people we spoke to on the phone eventually found the email while we were talking. He adds, “Guests check a box at checkout to check our social media pages before visiting. Anyone who visits the social media pages would see the updates.”

Garvie also claims that the Meridian Foundation is in the process of building a park where the festival was to take place, and that Balloon Glow Tour paid the foundation to prepare the park for the event, but due to the weather the grass did not didn’t push, so they couldn’t have the event there.

ABC11 has attempted to confirm this with the foundation but has heard from no one.

“In the case of Efland, we were unable to use the new park because it was still too muddy for the balloons and also too muddy to keep the guests safe. It makes no sense to try to delay any further a few weeks as we move into colder, wetter weather.” Refunds were still happening as stated on their Facebook page, but it takes 5-7 business days. Anyone who doesn’t get a refund by Wednesday, Nov. 2, should contact The Balloon Glow office, Garvie said.

The best way to avoid losing money in a situation like this is to always use a credit card when making a purchase. It gives you the best protection. Several ticket holders said they filed a dispute with their credit card companies.

However, Garvie said this only slowed down the refund process.