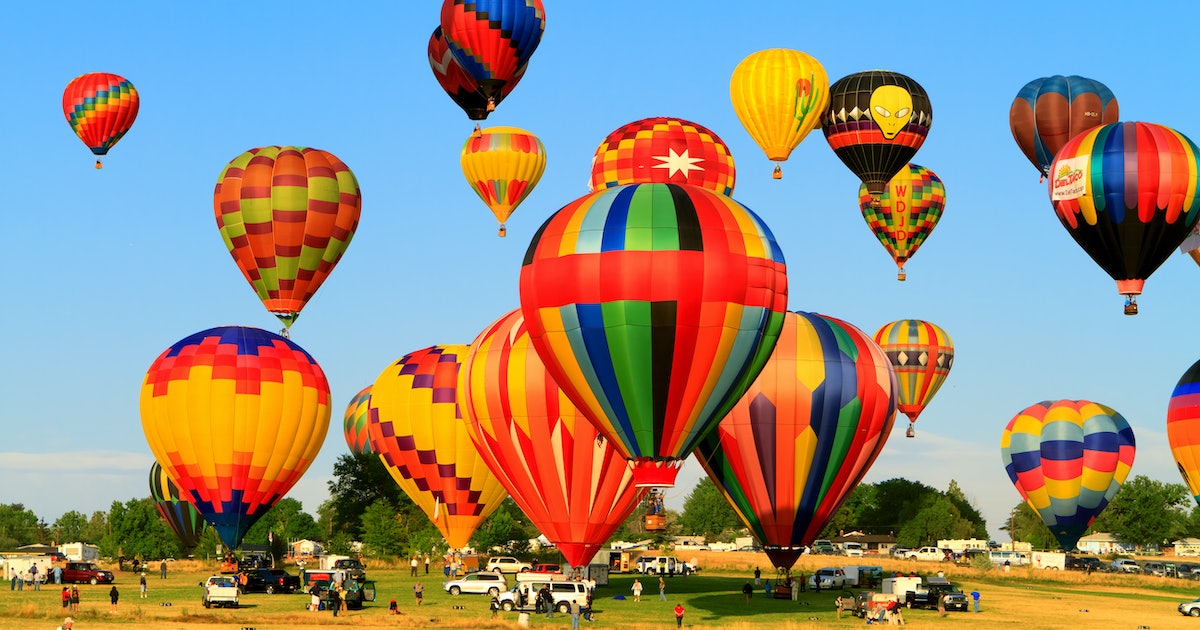 In the sky above Reno, Nevada, Darth Vader soars in the sky, but not in his TIE Fighter. Instead, it’s simply Vader’s signature helmet, reincarnated as an 87-foot-tall hot air balloon, with a relatively small flame below to keep it afloat in the stratosphere. On the ground, beneath this inflatable shrine dedicated to the famous Sith Lord, a legion of loyal Stormtroopers, as well as a life-size breathing version of Vader himself, salute with other star wars fanatics.

This is just one of the scenes from Great Reno Hot Air Balloon Race, the world’s largest free hot air balloon event, which takes place every September (9-11 this year) in Reno’s Rancho San Rafael Regional Park. What started as a small community balloon festival of just 20 balloons in 1981 has grown over the decades to include around 100 balloons. Today, 120,000 spectators gather in Reno to marvel at the miracle of wingless flight, as the bright colors of giant balloons fill the sky.

However, you will see much more than your standard inverted teardrop balloons. At the Great Reno Balloon Race, there are hot air cats, hot air birds, hot air armadillos, giant sloths, Looney Tunes characters and a UFO – a spaceship not associated with the Stormtroopers at the bottom .

The Stormtroopers, members of the 501st Legion cosplay collective, with the Darth Vader balloon — piloted by a fellow Belgian star wars fan Benoit Lambert — inspired star wars themed activities and contests at the Great Reno Balloon Race. But you don’t have to be one star wars fan enjoying the festival. In fact, most of the event is not star wars– related, and there are plenty of family activities to do, as long as you and the family wake up before dawn. Indeed, favorable conditions for launching a hot air balloon are generally in the morning, just after sunrise. Preparations begin before first light.

The hot air balloon race is a free public event so everyone can come to the park at 5 a.m. for what festival organizers call “Dawn Patrol.” There, families can watch the balloons rise from the ground as they inflate with flames and giant fans. In the nearby sky above is another daily scheduled event, the Super Glow Show, in which a handful of balloons perform a flashing light show set to music. These two experiments lead up to the launch of the mass ascension at 7am, when the balloons rise into the air to race in the general direction of where the winds are taking them.

However, the Great Reno Balloon Race is not about speed; it’s about navigation accuracy to different targets found in the area. Pilots and their crews maneuver their aircraft towards targets by exploiting directional winds at different altitudes. Once they fly over a target, they drop a beanbag where an X marks the spot or press a button on a GPS tracker to do so virtually.

As fun as it all sounds, this part of the race is hardly a spectator sport as the balloons are already too far away to watch the bean bag drops. Instead, attendees of the Reno Balloon Festival can simply be thrilled with the colorful scene of balloons of various shapes hovering in the sky.

However, if you or your family fancy a hot air balloon ride, tethered rides from two balloons that remain in the park are offered for $5. From above, you’ll be able to see the landscape below with a bird’s eye view – or the eye of an armadillo, tiger, or Sith Lord, for that matter.