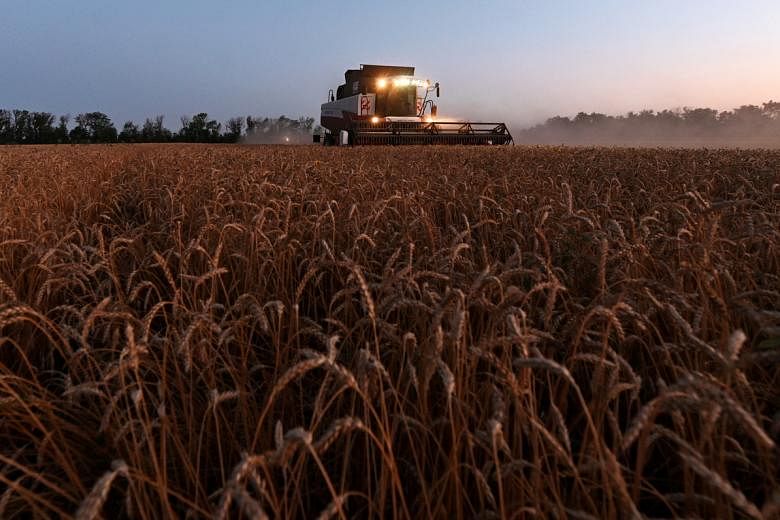 KUALA LUMPUR (BLOOMBERG) – A dramatic rise in crop prices, from wheat to palm oil, has raised fears of a huge rise in food prices. Those fears only worsened on Thursday (February 24) after Russian forces attacked targets across Ukraine.

The two countries are major suppliers of cereals and edible oils.

The crisis has pushed wheat to its highest level since 2012, while drought in South America has clouded the outlook for soybean supplies.

Palm oil, which is used in thousands of products from biscuits to shampoo, is breaking records as a labor shortage curbs production at Malaysia’s top producer.

This could mean higher prices at grocery stores as everything from pasta to chocolate becomes more expensive to produce, further squeezing household budgets already strained by rising inflation. A measure of global food costs calculated by the United Nations rose near a record high in January.

The Russian-Ukrainian crisis “represents a major concern for vegetable oil, wheat and corn,” said Mr. Oscar Tjakra, senior analyst at Rabobank in Singapore. “We started 2022 from a low inventory position in many agricultural commodities.”

Russian forces hit Ukrainian towns after President Vladimir Putin ordered an operation to demilitarize the country. That sparked a rally in commodities on Thursday, pushing Brent crude oil above $100 a barrel for the first time since 2014 and sending Chicago wheat futures up nearly 6%.

Ukraine and Russia account for around a quarter of world wheat trade, a fifth of corn sales and 80% of world sunflower oil exports.

Soaring fertilizer prices worsen the outlook for inflation. The market is already feeling the pinch due to reduced potash supplies from Belarus after US sanctions, and any reduction in crop nutrient exports from Russia will fuel the pressure. With farmers reducing their use of fertilizers, this could lead to lower crop yields and drive up food prices even further around the world.