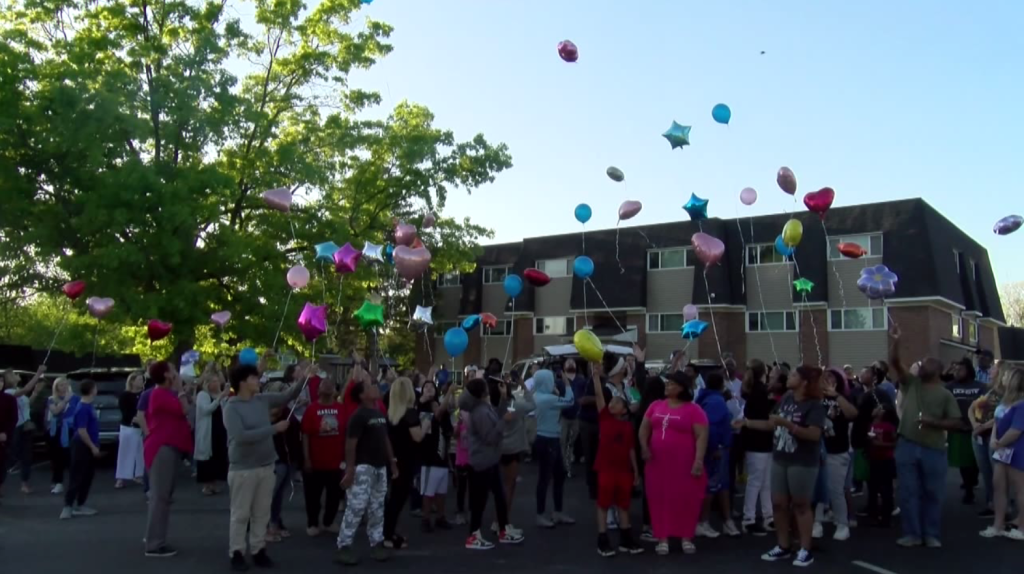 Along with prayers, guest speakers and songs, there was also a balloon release in honor of the two children.

LEXINGTON, Ky (WTVQ) — Hours after the mother accused of murdering her two children was jailed, the community came together to remember their tragically cut short young lives.

“I’m sorry it took a tragedy like this,” said Reverend Terry Lewis of Faithpointe Church, which is opposite Parkway Manor apartments on Rogers Road.

Family, friends and school leaders have come together to remember the lives of 13-year-old Deon Williams and his 5-year-old sister Skyler, who tragically lost their lives a week ago.

“Deon has always had A’s and B’s; returned on time; never fell asleep in class,” one of Deon’s friends recalled.

“Skylar inspired the most fun we’ve had in the classroom all year,” said Cerise Bouchard, who taught Skyler at Mary Todd Elementary. “Everyone liked to cook and eat. In life, these are the things that bring us together as family, friends and communities.

Their mother Nikki James, incarcerated in the Fayette County Detention Center on Monday, has been charged with their murder. Police said she had been in hospital since the incident. Police could not provide further information.

“When children die, we often ask why,” Bouchard said. “We try to make sense of it. But it doesn’t make sense, it never will, and it shouldn’t make sense.”

Along with prayers, guest speakers and songs, those who gathered released balloons in honor of the two children.

“It’s good for me as a teacher to know that there is, has been and still is a caring community around Skylar, Deon and their family,” said Bouchard.

Pastor Lewis said the balloon release was a final goodbye and a reminder of what lies ahead.

“I guess that’s when for those of us of the Christian faith, that was that moment where we kind of get the picture of what we talked about that one of these days, all of us, you know the old song says “I’ll Fly Away”, just that moment when we’re gone. But we are in the presence of the Lord. We are still who we are. Skylar and Deon are still who they are, just in that precious resting place in the arms of Christ.

Pastor Lewis says his church is planning to hold outreach events at the apartment complex, but does not know when these will begin.