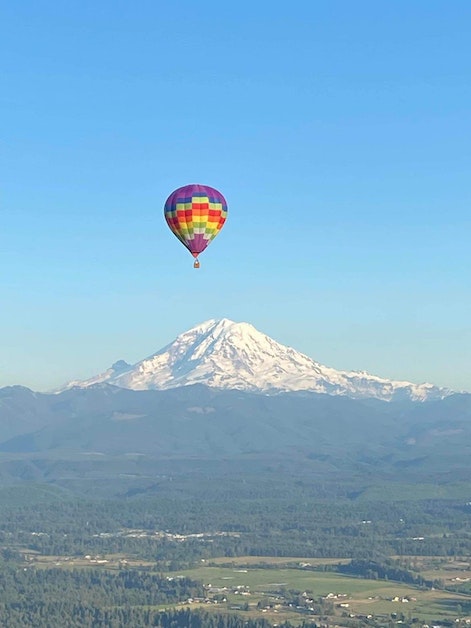 She is now a pilot of the “Happyanunoit” and, with her crew, has discovered a new passion by participating in national hot air balloon competitions.

The team, known as the “Ballooney Tunes Crew”, just took fifth place in the US National Women’s Balloon Championship out of a field of 14 pilots.

This competition was held at the same time as the National Balloon Classic in Indianola, where 115 balloons and their pilots took flight earlier this month.

Walter is a member of Rat City Roller Derby, where she is known as “Canna Whoop Sass” or “Canna” for short. And when the pandemic put an end to full-contact sports, she needed something to do. Luckily, Walter had an idea that soon caught on with his teammates.

“A small group of us kind of stayed connected to stay active,” she explained. “We were meeting online and doing virtual workouts.”

These workouts have extended to trail rides, skatepark tours, and even indoor rock climbing. Then, after four years away from hot air ballooning, Walter decided it was time to take flight again.

“The first group I went to was my roller derby friends, they turned adventure buddies into a crew for me,” she said. “And of course they were all immediately on board.”

Something unique about the crew of the Happyanunoit – they are all female and trans-non-binary. This is not typical in the hot air balloon community.

“I’m starting to see more diverse groups in the hot air balloon community than in the past,” Walter said. “But the sport, especially the drivers, is still very male dominated.”

She also says that the reception has been very good so far.

“Most people will say how unique it is that we’re not a group of men,” she explained. “We got a lot of compliments on our choice of colorful jumpsuits that we wear.”

The crew of a hot air balloon is a lot of work — there is the crew chief who oversees all activities on the ground. They drive the truck chasing the ball, so they can park it where it lands. There’s the navigator, who tracks the balloon’s GPS position and stays in radio contact with Walter as she flies. Other crew members help cold inflate the envelope. (That’s the name of the actual balloon part of the hot air balloon.) And there’s the person holding the “crown line,” or the string that connects the top of the balloon to the basket.

Another factor they consider is who can get in the basket with Walter. Unlike large commercial balloons that can carry 10-15 people, Walter’s is only a two-person basket.

“We work as a team to decide who can take a ride,” she explained. “Right now we’re on a rotation system. So we keep track of who did rides? Who didn’t? Everyone spins with me.”

Walter is truly impressed with their crew’s performance for the first time in these new conditions at the National Balloon Classic.

“Our expectations were just to have fun and be safe,” she said. “And so the fact that we did well on one of the first mornings of competition and then were able to finish in fifth place was quite exciting.”

Hot air balloon competitions involve a myriad of different tasks. The “Balloon Meister” and his team will create tasks for balloon crews to complete, such as using different wind directions at different altitudes to fly to a specific location on the map and drop a bean bag on a target, with more than points marked closer to the center where you are.

The end of the flight, of course, always comes with a landing. And since hot air balloons are at the mercy of the winds during any given flight, that sometimes means landing in unconventional places. Walter says that while their experience so far with homes and landowners in the Pacific Northwest has been quite positive, his crew are prepared.

“We started carrying cold champagne bottles in our cooler,” Walter explained. “When we land on people’s property, we give them a bottle of champagne, and that seems to help improve the situation a bit.”

As for what’s next, Walter says his crew are chomping at the bit for more competition.

“This last event was our first competition together and was a chance for us to see as a crew if this was something we were interested in,” she said. “On the way back they were already investigating the next competition we will be competing in. So I imagine our future will include a lot more.”