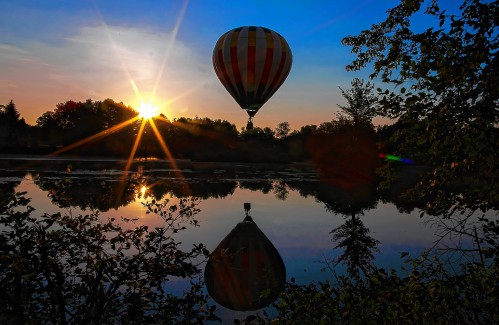 This year’s hot air balloon rally in Pittsfield will be special.

For one thing, it’s the first time the gathering has taken place in earnest in the past three years after the festivities in 2020 and 2021 were canceled due to the pandemic. Second, it’s the 40th anniversary of the rally held annually by the Suncook Valley Rotary Club. Third, this anniversary is accompanied by an asterisk.

Pilots like Heaven Sent Ballooning’s Mike Olin have taken to the skies for the past two years during the weekend of the rally to give the community the same serene sights of seeing orbs floating in the sky. Even though annual must-haves like the carnival rides and rotating breakfast were canceled, the balloons still took off, which is why this year still marks the 40th anniversary.

“We still had the spirit of the hot air balloon rally even though we were restricted,” said Fallon Reed, president of the Suncook Valley Rotary Club.

Olin, from Warner, bought his balloon about eight years ago after his father passed away, hence the name, Heaven Sent.

He said flying around the community during COVID was inspiring.

One of the Valley’s newest ventures, Over the Moon Farmstand, home to Moonlight Meadery and Hidden Moon Brewing, will host live music this year.

Meet at the Rotary Club Web page for a full calendar of events.