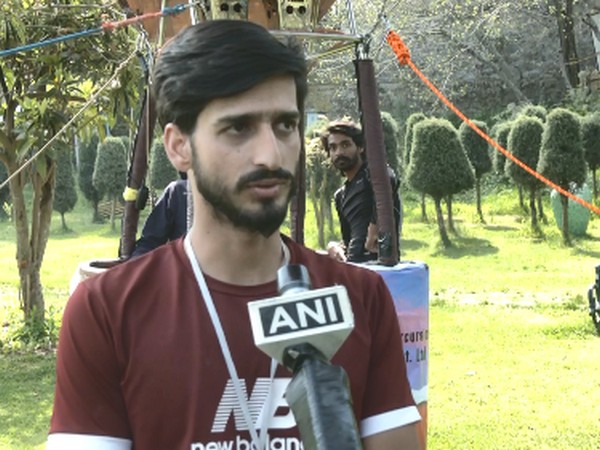 The rides were launched by the state Department of Tourism in conjunction with a private company on April 2.

The hot air balloon is said to have the capacity to hold four people in addition to the captain, ensuring stunning views of the Zabarwan Mountains and Dal Lake in Srinagar.

Zeeshan, an operations and marketing manager of a private company which first introduced ‘hot air balloon’ services in the Union territory, said: ‘We introduced hot air balloon for the first time, which we also market this. We have two slots for tourists to enjoy the ride, namely the morning slot where the service will operate from 6:00 a.m. to 9:00 a.m. while the second slot will operate from 4:00 p.m. to 8:30 p.m.

In a conversation with ANI on Thursday, Zeeshan said that “the balloon can currently rise up to a height of about 200 feet. It is a tethered balloon that is tied with the ropes on all sides for the highland effort in Zabarwan Park.

He also explained the company’s plans to improve tourism and create recreational activities that were previously unavailable in the valley.

“We were the ones who introduced the concept of aero-balloon in Kashmir in 2014 but now we have replaced it with hot air balloon as we want people to enjoy activities here in Kashmir which were not previously available here “, he added, mentioning their next adventurous concept of Glamping.

According to the marketing manager, the company also offers tourists the possibility of paragliding and rafting on the river and this new concept of Glamping would be more like a luxury campsite.

“Glamping, luxury camping, will also be the very first such activity to be introduced in Kashmir,” he said.

Zabarwan park tourists were delighted with their experience and recommended everyone to come there, at least once.

“It is a very nice experience to see Dal Lake and have a 360 degree view of Srinagar. It certainly makes people very happy,” said tourist Sumita Dass.

Another visitor, Pooja, spoke of her dilemma in visiting UT in the first place, and ultimately spoke of her “wonderful experience” on her first visit to Kashmir.

“This is my first visit to Kashmir. We used to be skeptical to come here because of controversy,” Pooja said while stating that UT tourism has grown now.

She added, “When we arrived here, we realized that it was peaceful here and the people were also very nice and polite.” (ANI)

This report is generated automatically from the ANI news service. ThePrint declines all responsibility for its content.