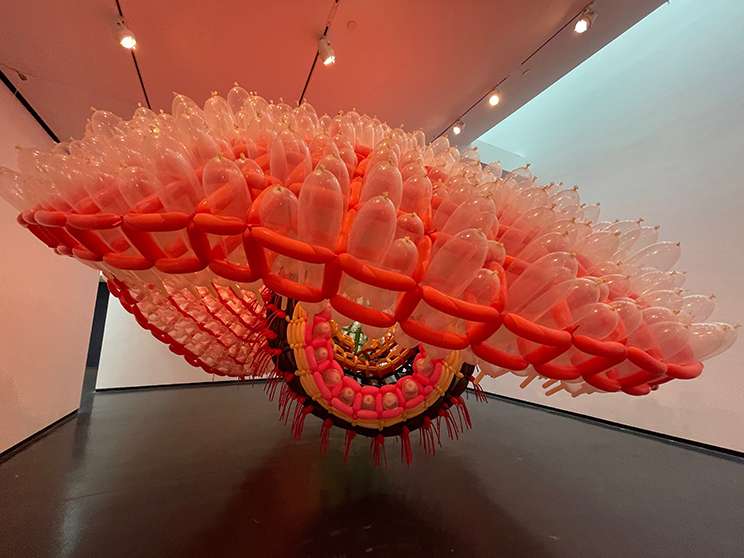 St. Pete-based artist Jason Hackenwerth does more than just balloon sculptures. The multidisciplinary artist began his career 20 years ago, making and exhibiting paintings in New York. But he was unhappy with the rate at which his paintings were selling, so he began experimenting with latex balloons on the subway near his studio.

“I would just blast little balls and stick them on the ceiling in these damp places,” Hackenwerth told The Gabber.

The work was interesting enough to catch the attention of the producer and curator of the Scope Art Fair, who gave Hackenwerth the opportunity to decorate the hotel lobby for the 2004 fair. without sleep or food for days, the Hackenwerth facility was demolished before the fair even started.

Then inspiration struck. Hackenwerth had a vision of connecting the balloons to create a shape.

“So I pushed through curiosity and fear and made the very first sculpture there, at that fair, and it took off,” Hackenwerth told The Gabber. “By the end of 2005, I had flown all over the world, everywhere, making sculptures in museums and art fairs. I got a grant to make a sculpture at the Venice Biennale. It was amazing.”

The Venice Biennale came with its own challenges. Hackenwerth planned to hang his balloon sculptures all over town, but the children of Venice had other ideas.

“I was climbing trees to hang sculptures as high as I could,” Hackenwerth told The Gabber, “or climbing the sides of buildings and terraces to hang the sculptures in places and walkways all around Venice. But no matter how good i thought i was, and no matter how good my parkour skills were, i couldn’t get them high enough that the kids who lived in Venice couldn’t reach them and then them fly. Every morning for a week I would go out and put these sculptures all over town. I started at 3 a.m. and by 10 a.m. I had them all over town. In the after- noon, the children were riding on bicycles carrying my sculptures.

“I put this thing on and went hunting, looking for these kids,” Hackenwerth told The Gabber. “It didn’t take long before we had a showdown. In front of the Ed Roche pavilion, I was fighting with kids on bikes [shooting] my balloon missiles from my giant bed bug sculpture.

Children have always been among Hackenwerth’s most enthusiastic fans. They ran under and around the balloon sculptures of Hackenwerth during the opening reception of Black matter at Creative Pinellas this summer, touching as much as they could reach.

I’m also excited about these balloon sculptures, but I don’t literally circle around them. Hackenwerth has a theory about this.

“I think in most cases balloon sculptures elicit a similar reaction from adults,” says Hackenwerth, “but adults are just much more reserved in how they express their reaction. And kids, they go crazy, because they don’t know what not to… Adults, they hold back, but children show us what we really feel inside.

The adults stood under the balloon sculptures of Hackenwerth in Black matter and took selfies before exploring the drawings and paintings in the adjacent galleries.

More than balloons Black matter walks us through 20 years of Hackenwerth’s career, including several stand-alone paintings as well as drawings and photos of past balloon sculpture designs. Together they offer a unique insight into the Hackenwerth process and take us to an alien world of UFOs, giant insects and alien shapes.

At Creative Pinellas until October 16.

The Gabber team has brought back the print version of the newspaper and we’ve redesigned our website to make it easier for you to get the news. We’re not out of the woods yet, and every little bit helps pay for our reporters, printer, and other expenses. Support local news and families – donate now to keep The Gabber Newspaper serving the community it loves!