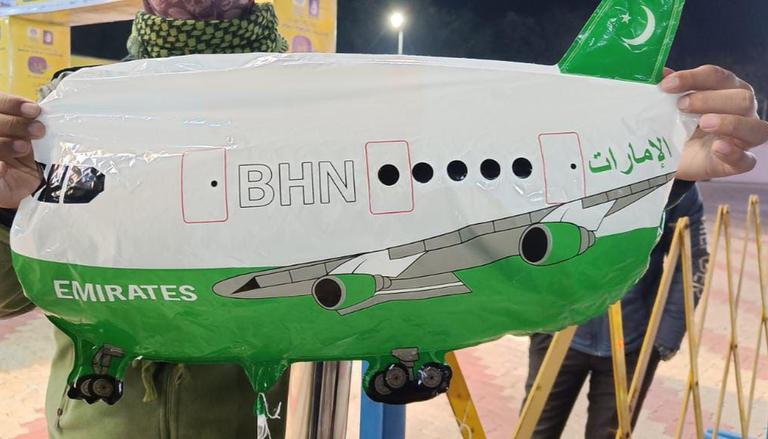 J&K police find another airplane-shaped balloon with BHN, Emirates written on it

Jammu and Kashmir police found an airplane-shaped balloon with the letters BHN and Emirates written on it on the Jammu-Pathankot national highway on Sunday. The incident was reported Sunday morning near the Indo-Pakistan border. Similar airplane-shaped balloons were recovered from different locations earlier along the international border in Nadd area of ​​Samba district in Jammu. Meanwhile, other balloons found in the past bore the inscription “PIA”, which stands for Pakistan International Airlines along the Line of Control (LoC) as well as along the international border.

The ball recovered by Jammu and Kashmir police on November 13 was colored green and white. It depicted the crescent moon and star which symbolize the Pakistani flag printed on it. BHN and emirates were written on the ball with Urdu language text that translates to “Emirates”. Police received the information about the suspicious balloon hovering in the area and immediately responded to the scene. An investigation has been launched into the matter to obtain further details. The balloon apparently landed near the Indo-Pakistani border. But such incidents have been significantly repeated at the international border and at the Line of Control (LoC) in recent months.

A green and white airplane-shaped balloon with BHN and emirates written on it was recovered from the Nadd area in Samba. Other ongoing investigations: Jammu and Kashmir Police pic.twitter.com/tl3B8QCY3V

Speculation that balloons infiltrated from the Pakistani side

In 2021, the similar looking green colored balloon landed in Sotra Chak village of Hiranagar sector. It was also found in Bikaner district in Rajasthan, Sarna village and Dantaur police station area. A PIA-shaped balloon was found in Hiranagar area of ​​Kathua district in J&K on March 9, 2021. Another was found in Ghadsana, Rajasthan on March 11, 2021. On March 16, another was recovered from the Balwal district in Jammu and Kashmir. On March 26, the airplane-shaped balloon was spotted in Dera Baba Nanak, Batala Punjab. On social media, Indians have often mocked the balloons which many believe could have infiltrated on the Pakistani side of the border. “They don’t have the funds to buy a real one, so they fly balloons,” one user said. “6th generation aircraft by Pak,” another joked. “When you can’t afford to fly an airbus, you fly balloons,” another tweet read.