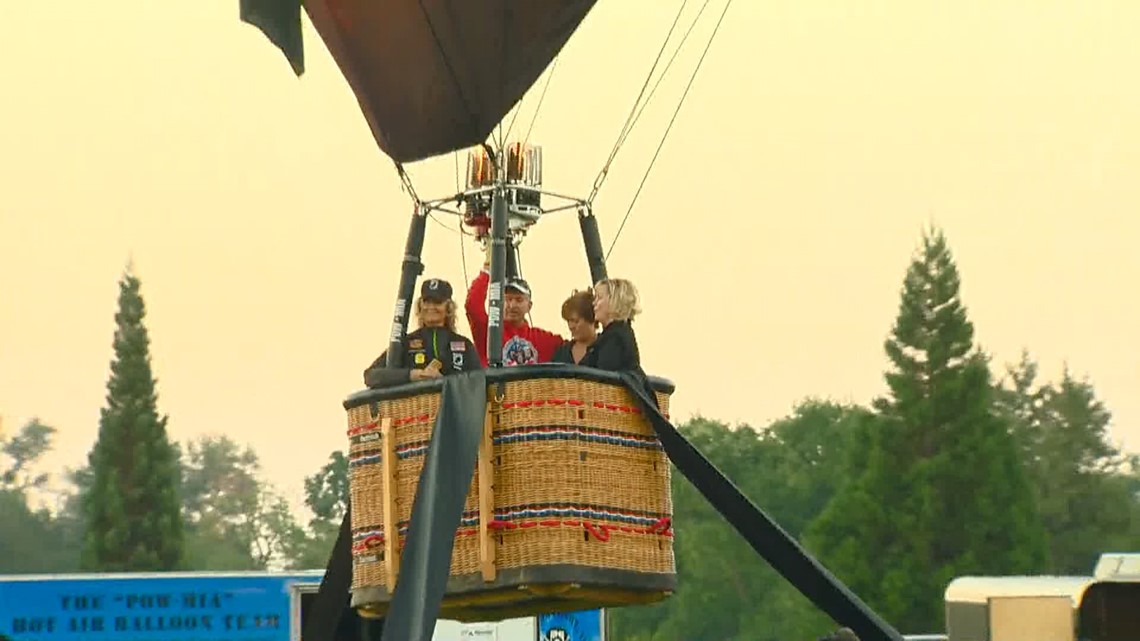 “May the winds…keep you with us on every flight”: Larry Gebert recalls Spirit of Boise

“We were all blessed to have shared his life and time with us,” Spirit of Boise co-founder Steve Schmader said before a tribute flight honoring Larry Gebert.

BOISE, Idaho – Larry Gebert was not a hot air balloon pilot, but the pilots who gather in Boise each year for the Spirit of Boise Balloon Classic honored him as a member of the hot air balloon family Friday at Ann Morrison Park, five months and a day after Gebert’s death at the age of 65.

“When a beloved pilot dies, a tribute flight is launched, with a single balloon floating in the sky, silhouetted against the rays of the morning sunrise, and trailing below, three long black banners to express to the both the sadness and mourning of those left behind, but also the joy and special memories they shared with so many, and left for us all to continue building in honor of their life of devotion to their friends, family and community,” Schmader said as he addressed the crowd Friday morning.

Minutes before sunrise, Larry’s wife, Julie Gebert, was among those lifted into the blue but smoky skies aboard the tribute balloon. The ball was decorated in honor of prisoners of war and missing in action (POW/MIA), with the words “you are not forgotten” printed on the ball, which had a POW/MIA flag perched on the basket and three black banners trailing below.

Schmader, now president and CEO of the International Festivals Association, is considered a co-founder of what is now known as the Scott Spencer Spirit of Boise Balloon Classic, named after another co-founder , balloonist Scott Spencer, who died in 2020. .

Since the first Classic in 1991 during the Boise River Festival, Gebert was there with Spencer and Schmader.

“Larry embodied community and embraced everything that brought us together,” Schmader said. “For all the rights I may still have invested in myself, I would like to recognize Larry Gebert as the pride of Boise. He left us all with endless memories and stories, laughter, puns, smiles and dreams , for he would remind all of us that we also provided him.We were all blessed to have shared his life and time with us.

“Every other morning, for over 30 years, in addition to the sounds of the burners igniting the rise of a spectacular canyon of color on the pitch, the joy and awe on the faces of children, families and friends, as the sky fills like an artist’s palette, hidden in our imagination, the spirit of Boise was not complete without the ever-welcoming and towering luminary and face of our community, KTVB meteorologist Larry Gebert,” said Schmader. “We have all lost a beloved friend, icon, spouse and father far too soon.”

As he concluded his remarks on Friday morning, Schmader glanced skyward and said, “Larry, I guess you’re here. Your endless friendship and support to the best of us all will always be a part of it. of the spirit of Boise. May the winds always be in your favor and keep you with us on every flight.”

You can watch the tribute in its entirety in the video posted below:

Watch more stories and tributes about Larry in our YouTube Playlist: