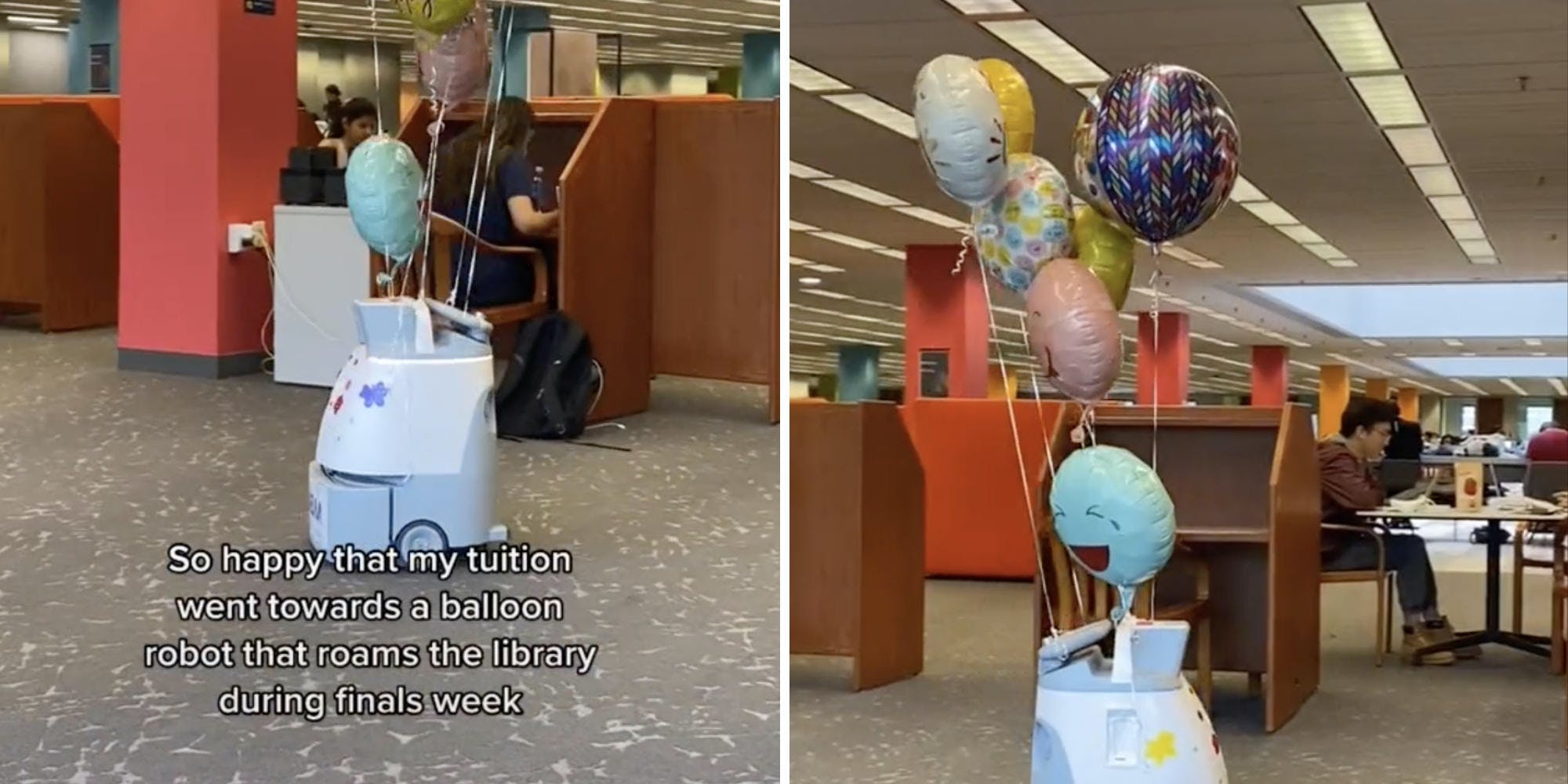 Northeastern University roasted for a balloon robot in a viral TikTok

Northeastern University is getting roasted on TikTok thanks to a viral video showing a robot browsing the college library during finals week.

The TikTok video was posted by Northeastern University student Meg (@winemom6969), who did not like the robot.

In the video, a mobile robot with seven balloons attached rotates in a library. Several of the balloons have smiley faces, and one says “Be happy.” It seems the robot’s intention is to uplift the students during a notoriously difficult week.

“I’m so glad my tuition went to a balloon robot that roams the library during finals week,” the video’s onscreen text reads.

Tuition at Northeastern University is $28,250 per full-time semester, according to the university website. For a four-year undergraduate degree, that’s a minimum of $226,000 in tuition, not including fees.

For Meg, a balloon robot didn’t cut it for finals week. She blew it in the caption of the video, saying, “But like huskies, I guess,” referring to the college mascot.

As of Monday, the video had garnered around 1.1 million views and mixed reactions from viewers. Some viewers thought the robot was actually cute.

“That’s really cute,” one viewer commented on the video.

“That’s so cute,” another viewer commented.

Some viewers said — perhaps jokingly — that the robot was doing its best to brighten up students’ lives during finals week.

“Don’t be mad at him he’s doing so well, look at him like he’s so happy doing his job,” another user wrote.

Some users said the robot was “money well spent,” but others said the money could have been used for something more useful, like working printers in the library.

“You have to pay to print, but hey, at least there’s a robot with balloons to hopefully deliver serotonin,” one viewer said.

Another viewer told Meg, “Your school is something else.”

“Don’t tell my dad or he’ll stop paying the bill,” the TikToker wrote in response to the comment.

The Daily Dot reached out to user @winemom6969 via a TikTok comment and Northeastern University via email.

Cecilia Lenzen is a journalism student at the University of Texas at Arlington and a freelance reporter for the Daily Dot.