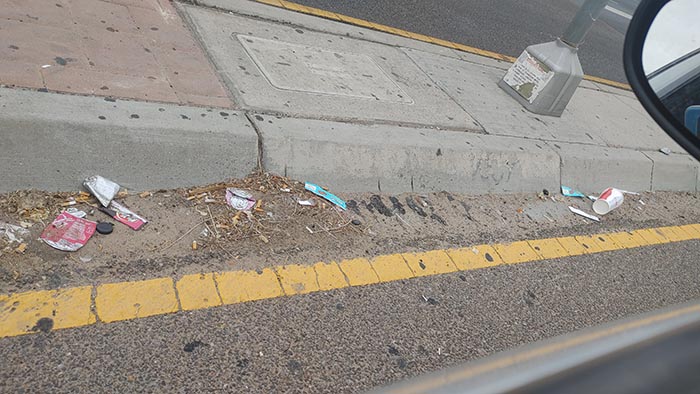 The Paseo del Norte, for its entire length, is dirty, trashy, with the shoulders of the road covered in old mattresses, scrap wood, car parts, needles – Bob Dean

THE COMPANY IS COMING, LET’S CLEAN UP: As the State Fair leaves New Mexico and the Balloon Fiesta enters Albuquerque, Bob Dean asks the annual question, “Why is this town so trashy?”

He says in his email “The Paseo del Norte, for its entire length, is dirty, trashy, with the shoulders of the road covered in old mattresses, scrap wood, car parts, needles, etc. An email to my councilor went unanswered.”

And it’s not just Paseo, which Bob says, “I use every day, but everywhere I drive. With the State Fair and the Balloon Fiesta here, I think that would be a priority.

CABQ: We’ll start with the city of Albuquerque. Emily Moore of the Solid Waste Department says, “We have a citywide cleanup scheduled for September 24 from 9 a.m. to noon called Company’s Comin’. We hold it every year on the last Saturday in September, and it’s one of our two large-scale clean-up events. Solid Waste and our Keep Albuquerque Beautiful program provide each neighborhood that checks in with bags and gloves, then take what is collected with each cleanup.

“In addition to these cleanups, we also have hundreds of volunteers expected at Balloon Fiesta Park. Those interested in signing up can visit cabq.gov/companyscomin” or call (505) 761-8167.

NMDOT: At the New Mexico Department of Transportation (which would be handling the Bob’s Paseo issue), Kimberly Gallegos says, “NMDOT has scheduled cleanups before Balloon Fiesta. Crews will sweep roads and remove trash and debris from roads and rights-of-way. »

That said, Gallegos “would however like to point out that although the writer states how trashy PDN is, our crews literally come out with no room on their shoulders and with PDN having no medians, they go up and down that stretch of roads and clean up do this frequently. Almost as soon as they are done, the trash is piling up again as if it was never there. We continue to ask for the public’s help in tying down and tarpaulining their loads. Please also do not not litter. Paseo is one of our busiest roadways and does not have much room for equipment other than a lane to clear roadways. Our crews are doing their best to track this ongoing issue and will continue to do it here and throughout the city and in New Mexico.”

BERNCO: In Bernalillo County, Antonio E. Jaramillo, Operations and Maintenance Manager, says, “Bernalillo County has a team dedicated to solving problems such as weed and debris removal of the right-of-way. We plan to focus on areas at or near Balloon Fiesta Park in the coming weeks before the party that is within our respective sway.

ON THE SAD STATE OF FAIR TRAFFIC: Several readers wrote in to share their issues with going or just being near the state fair this year.

And Ryan Christopher Duhigg Randall adds that all that backup on Louisiana meant drivers were “blocking intersections at Constitution and Lomas. I live in the area and was blocked at green lights where I had the right of way for multiple lights.

Oona Gonzales, media and marketing manager for the fair, said, “It’s clear from ticket sales and two sold-out shows inside Tingley Coliseum that new Mexicans are excited to return to the fair. Unfortunately, this comes with many of the challenges that big events like Balloon Fiesta and Zozobra bring with them. The show saw record attendance during the (first) weekend and high traffic volumes were inevitable. The fair does its best to alleviate and relieve traffic problems as much as possible. »

Gonzales says this included a designated carpool gate for Lyft and Uber passenger pickup and drop-off, a free bike valet, and the city’s Zero Fares to the Fair promotion on ART buses from Central and Unser transit hubs. or Uptown.

2022-09-24
Previous Post: PLATEL’S PEOPLE: Why the ball burst for Brand Beckham
Next Post: Coney’s ball career on the verge of new heights