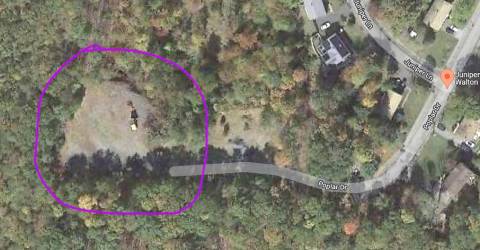 The City of Chester held its first public hearing on a planned Verizon cell tower at the intersection of Juniper Lane and Poplar Drive on August 3. This project affects both residents of Chester and Monroe and potentially affects visitors to Goosepond Mountain State Park.

Paul Ryan of Murray Law Firm, representing ARX Wireless, LLC, began the presentation to the planning committee and attendees. The proposed site is a 4.6 acre flat, wooded parcel of land leased by the City of Chester atop the Walton Park Subdivision between two other city-owned lots. As the crow flies, it is less than a mile from the southeast edge of Goosepond Mountain.

The land is currently zoned SR2 which allows cell towers. The proposed cell tower is a 150 foot “monopole” topped with a four foot high lightning rod creating an overall height of 154 feet. Verizon would have three panels with three antennas at the 146′ level, the highest level. As soon as the tower is built, they will start looking for roommate sellers to rent the lower levels. At this low height, the FAA does not require overhead lights.

Access to the cell tower would be from the west end of Poplar Drive, with security provided by a sixty foot by sixty foot fence. In addition, setback requirements are met in all directions, and the terrain will be minimally affected. A satellite image of the Google Maps location shows a driveway leading to partial clearing in the trees:

The City’s consulting engineer, Fusco Engineering, reviewed all of the documentation submitted by ARX Wireless, including the balloon test results, and recommended that Council evaluate the photos. Other tasks assigned to ARX Wireless and Verizon included: detailing the diesel storage location for the generator and performing an endangered species site audit. They found the geotechnical works and the foundations acceptable.

Virtual Site Simulations, LLC, conducted a balloon test on Saturday, July 30, 2022, attended by Don Serotta, Justin Brigandi, and Larry Dysinger of the Planning Board. The second page of the report shows a satellite map of where the contractor took photos. Of the 35 sites chosen, seven (20%) of the locations were marked as having visibility of the proposed tower. Three of these locations are in the Walton Park subdivision, where one site was very close to the playing field on Oak Drive. The full report can be viewed at bit.ly/ToCRedBln.

Interestingly, just days after the balloon test was completed, the New York State Office of Parks, Recreation and Historic Preservation (NYS OPRHP) sent a letter to Planning Board Chairman Dan Serotta , requiring the same test. This letter, dated August 2, 2022 and signed by Gabriella M. Cebada Mora, expressed concern that scenic views from Goosepond Mountain State Park over more than a third of the park could be affected. The Palisades Interstate Park Commission also shares these concerns, according to Cebada Mora.

Before Verizon presented the RF report, Mr. Serotta informed the audience about federal regulations mandating the licensing of cell towers, called the “Telecommunications Act of 1996” (bit.ly/ToC_1996Tele). This law directs city councils across the country to govern the installation of said towers while following federal regulations. One such rule states that city councils must ignore the RF factor if the frequency is below the FCC guidelines of twenty watts per hour.

The City of Chester leased this land specifically to install a cell tower to serve this area, given the low quality of cell service. The city council approached ARX Wireless to apply to the city and provide all documents and studies. Since the city council chose the location of the site, the planning board can only support or deny the aesthetics of the site.

During a detailed presentation by Verizon engineer Wasif Sharif on current and future cellular coverage, he discussed the limitations of existing cellular towers for the number of users in the area. It showed, in detail, how attempts at load balancing failed. Additionally, if cellular coverage was poor outside a given building (office, home, store, etc.), users would experience little or no service inside a building.

Tom B., from Chester, said he wanted to bring visibility to a water supply project he was working on with the consulting engineer near the site. Mr Fusco said he would ensure the water supply was delineated on the plans for the cell tower.

Next, Larry M. of Monroe expressed concern about the cell tower’s proximity to the Oak Drive playground and basketball court. He questioned the Planning Board about moving the structure farther on the property within setback requirements. In his experience, children use this playpen quite often and he is concerned about EMF exposure.

The final public comment came from Linda, who did not say where she resides. She questioned the urgency of the cell tower, given that the City of Chester approached ARX Wireless, not the other way around.

A letter was also submitted to the Planning Board by Tracy S. regarding the hearing. Among the concerns about the location of the tower was the city’s outreach to area residents. They recommended expanding the radius of residents notified beyond 500 feet to include more residents. They also asked for advance notice of future red balloon tests.

The public and the New York State Office of Parks, Recreation, and Historic Preservation generally agree with the City of Chester regarding the need for a cell tower in the Walton Park area. With the exception of one customer who spoke up, most comments revolved around the actual location and aesthetics of the tower to minimize the impact of field of view.

Mr. Serotta reminded ARX Wireless of their follow-up items. He also proposed to keep this item open for a public hearing at the next Planning Board meeting on September 7, 2022.

2022-08-15
Previous Post: Opening of Sweet Magnolia Party Co. in Bowdon, with a balloon bar
Next Post: The Great Falls Balloon Festival returns to the air this weekend after being grounded for 2 years