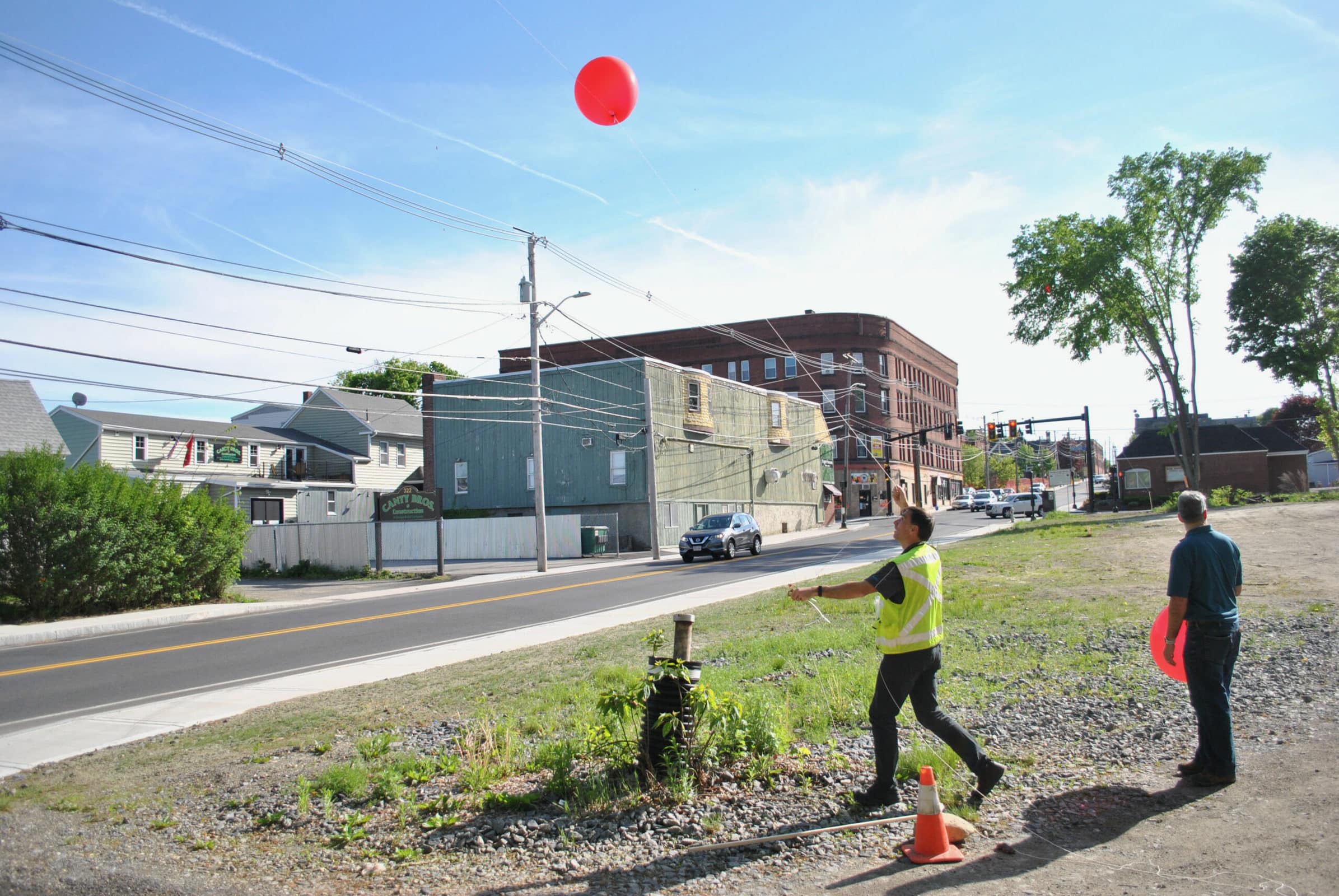 MARLBOROUGH – Balloons flew over the French Hill area of ​​Marlborough on Wednesday afternoon as part of a ‘balloon test’ to show the approximate dimensions of a proposed mixed-use development in the area.

On the ground, city councillors, neighbors and the developers themselves mingled, holding street talks about a project that has already been the subject of multiple recent meetings at City Hall.

“The aim is to revitalize the whole area,” Councilor John Irish said in comments to the Community Advocate.

Located at the corner of Lincoln and Mechanic streets, the offers The Alta Marlborough development would be the creation of Wood Partners, a national real estate developer with several similar projects in central Massachusetts.

This development would comprise 276 units, with parking provided entirely on site, according to the developers. The majority of the 470 parking spaces, in turn, would be provided in a parking garage that Wood Partners plans to build.

There would be retail space on the first floor of the development. And ten percent of the units would be classified as affordable.

As they presented their proposal, the developers announced their intention to construct an auxiliary car park with 22 spaces and toilets for public use alongside the nearby Assabet River rail path.

Tabled earlier this year, the Alta Marlborough project was most recently before city council on May 9 for a public hearing.

There, community members shared their thoughts.

While several people backed the plan, others raised concerns, asking, among other things, whether the developers could realistically provide full on-site parking.

“I think we can all agree here that the Lincoln Street corridor is probably one of the busiest, if not the busiest areas in the city,” said Marlborough resident Bill Burke.

At least four city councilors were then present at Wednesday’s balloon test, sharing their thoughts on the project.

Among other things, Robey raised concerns about the parking lot and public-use restrooms planned by the developers.

“I’d rather it wasn’t a parking lot,” she said. “I think this will add to congestion as bicycles and pedestrians cross the train tracks to continue towards the city centre.”

Watching balloons float over a now empty lot at the intersection of Lincoln and Mechanic streets, Irish said his greatest interest was in seeing how Alta’s proposed parking lot would fit into the overall scheme.

He also celebrated the city’s efforts, including rezoning work, to create more space for mixed-use projects in Marlborough.

Councilor Don Landers called the Alta project “a real asset to the city,” saying he was confident the plans will go ahead.

At a time when state and local leaders have repeatedly warned of an urgent housing crisis, Landers said Wood Partners’ plans fill a need.

Housing, he said, will also go hand-in-hand with ongoing economic development efforts in Marlborough, which have, in part, sought to attract larger life sciences employers to the town.

“If you’re expecting them to come in and build biotechnology and stuff,” Landers said, “you have to give employees a place to live.”

A former deputy superintendent of Marlborough Public Schools, Landers further addressed the concerns that frequently arise around housing projects and their impacts on the school system.

Councilor Sean Navin said he was “delighted” to see potential investments in the area.

He then noted recent comments on the project, considering next steps in the city’s review process.

“We’re going to be able to address some of the concerns people have raised and have conversations, but the opportunity to bring someone in and clean up an entire city block is exciting,” Navin continued. “Hopefully this will mean good things for this neighborhood.”

Several others, however, said they view the project favorably, especially after some of those same conversations.

He said he had seen Wood Partners’ plans, but had questions about how the developers would avoid making these drainage problems worse.

“It needs to be fixed before it gets built,” he told the Community Advocate.

He then said he was satisfied with the responses he received on Wednesday.

“They have the means and the bandwidth to do this,” he said.

The municipal councillors, meanwhile, reiterated their comments on the interest of this balloon test.

“The most powerful part of any development process is getting information to people,” Navin said. “That’s how we do it. Bring in the neighbors and make sure they understand what helps here.

The balloons themselves, he continued, are as much a symbol of potential as stark markers of a project that has yet to be approved.

“It’s both informative and [a sign of] what could be,” he said. “This is a good thing.”

This project is still under consideration by the city, having been referred to the city council’s urban affairs sub-committee and site plan review committee.

Meetings will continue as this process progresses.

In the meantime, the city has implemented a form for community members to submit questions to the developer regarding this project.

This form is located at https://www.marlborough-ma.gov/planning-board/webforms/questions-developer.