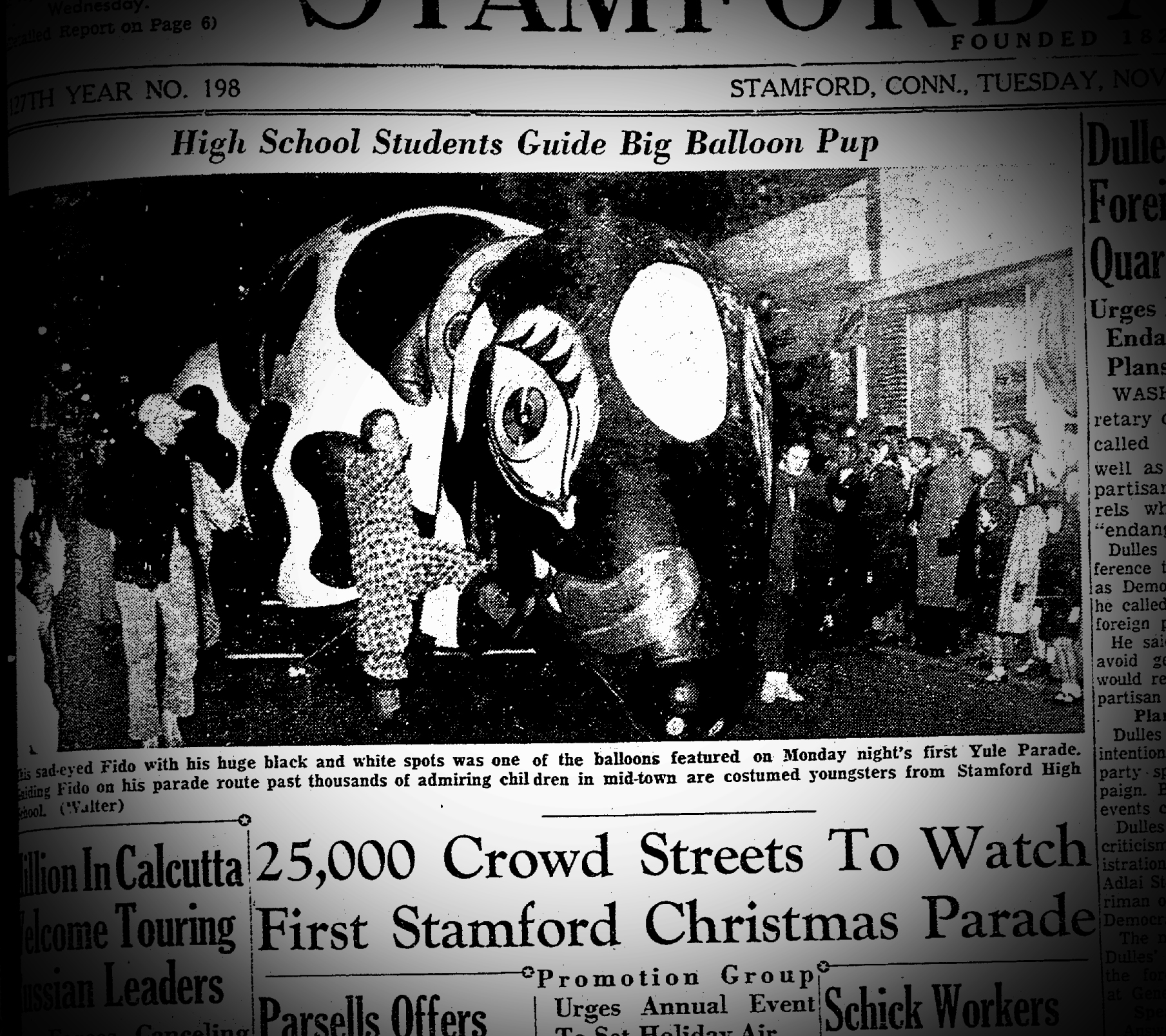 This is a carousel. Use the Next and Previous buttons to navigate

Parades, it seems, can be forgotten as quickly as the last password you changed (you think about that now, don’t you?). The Stamford Parade returns on Sunday November 20 for the first time since 2019 after a COVID hiatus. You wouldn’t expect locals to forget an event that has gone on uninterrupted since 1993, but let me show you that history can be fleeting.

Stamford held balloon parades from 1955 to 1957. I know that because I read it in the paper (remember that?). Records reveal they weren’t small either, unlike Stamford’s first modern Black Friday parade in which marchers repeated the loop to double the running time by five minutes.

The 29th annual Stamford Town Center Spectacular Parade will take place on Sunday, November 20. The parade will start at noon.

Even balloons back then outnumbered their modern ancestors. The parade this Sunday promised 15 inflatables. In 1955 there were 35. Today they tend to be marquee characters who insist on using full birth names (Daniel Tiger, Thomas the Tank Engine, Clifford the Big Red Dog. I don’t know why he is not Robert the Builder). At the time, most inflatables were generic characters, with the exception of Elmer the monkey and Porky the pig.

And here’s a twist: the parades of the Ike years were held at night. The mind’s eye can’t help but summon images like flickering black and white images on a Philco TV set. Try a little harder. Imagine something like “Miracle on the 34the Street” being instantly colorized as then Mayor Thomas Quigley declared the start of shopping season by ordering the illumination of draped lights on Atlantic Street and its intersections. Boom, flourishes of color bathe Stamford town centre.

It doesn’t help that the mayor’s pomp and circumstance was limited to an “OK” pedestrian signal to start the parade. It also doesn’t help that this is the part where I should be able to quote an eyewitness. A faithful voice of Stamford who was just a child at the time, still able to paint a word picture with Spielbergian attention to period details.

It’s true, I have nothing.

Ever since I first found clips of 1950s parades two decades ago, I’ve regularly asked longtime Stamford residents if they were there. I had no success, so this week I lit a fuse to try to get the word out around town, confident that one of the 25,000 people in attendance could put words where those ellipses appear.

I reached out my hand Stamford Aged Center to survey members.

It seemed fortuitous that U.S. Rep. Chris Shays dropped me a note on Thursday because he was in town to address the Senior Men’s Association. This was not the case.

I’m starting to wonder if anyone is really from Stamford.

Renee Kahn, who is synonymous with preservation in Stamford, arrived in the city right after the parades. Carmen Domonkos directed me to another longtime member of the Council of Representatives, Philip Giordano, whose brother Bruno was once mayor. Giordano recalled that he had just started with the fire brigade during those years and that he might have been on call.

“I’m 95 and I don’t remember it,” he said on Friday. “But I look forward to reading your article.”

Rick Redniss, an Aboriginal and land use planner, suggested several possible sources. Closest to success was the ever-faithful Al Koproski, a lifelong resident who was serving in the US military at the time and stationed on nearby Staten Island.

“I vaguely remember the balloon parade, but it was nothing like what we have today,” Koproski replied.

Redniss also asked if I did the obvious and checked in with the Downtown Special Services District, which pulls the strings for the modern parade.

I told them about it years ago, I explained it to them.

“We thought we were inventing a wheel, not reinventing one,” former DSSD impresario Sandy Goldstein said at the time.

So I went back to my most reliable source, the newspaper. During our exchange, Redness mentioned that his uncle, Arnold Walter, had been a Stamford Advocate photographer for several years, but he wasn’t sure when.

For each of the three years of the parade, all photos of the “Inflation Party” and the parade are attributed to “Walter”.

There were some fun ideas at the “Yule Parade”, including a 7-foot “magic mailbox” used by volunteers for letters to Santa collected from the crowd. But the text reveals a few possible reasons why the event didn’t survive into the 1960s. Dumbo and some other balloons couldn’t navigate around corners. A few of them were transported in severed body parts. After several balloons in the inaugural parade quickly deflated, a “transfusion” station was set up in year two at Hoyt and Summer streets.

A massive orange organ that featured Santa that first year lost a wheel at the post office and collided with the eight reindeer so they had to skip the last third of the course before it ended on Broad Street.

The second year, the chariot carrying Santa & Co. lost two wheels, leaving them stuck in the middle of the road. The wheels indeed had to be reinvented.

In 1957, the retitled “Winter Phantasy” was moved to daylight hours. Maybe the organizers just wanted to increase the chances of the main attraction (no, not Elmer the Monkey) making it to the finish line this time around. This strategy failed.

“To the dismay of parents and the amazement of children, there were five Santa Clauses, requiring quick thinking,” the newspaper reports.

The kids decided that the First Fidelity Santa was the real deal, as he was the only one with elves and presents.

He may be my only hope of memory. Keep an eye out for a 75-year-old man with a limp.

Surely no one would forget getting their toe stubbed by Santa Claus, right?