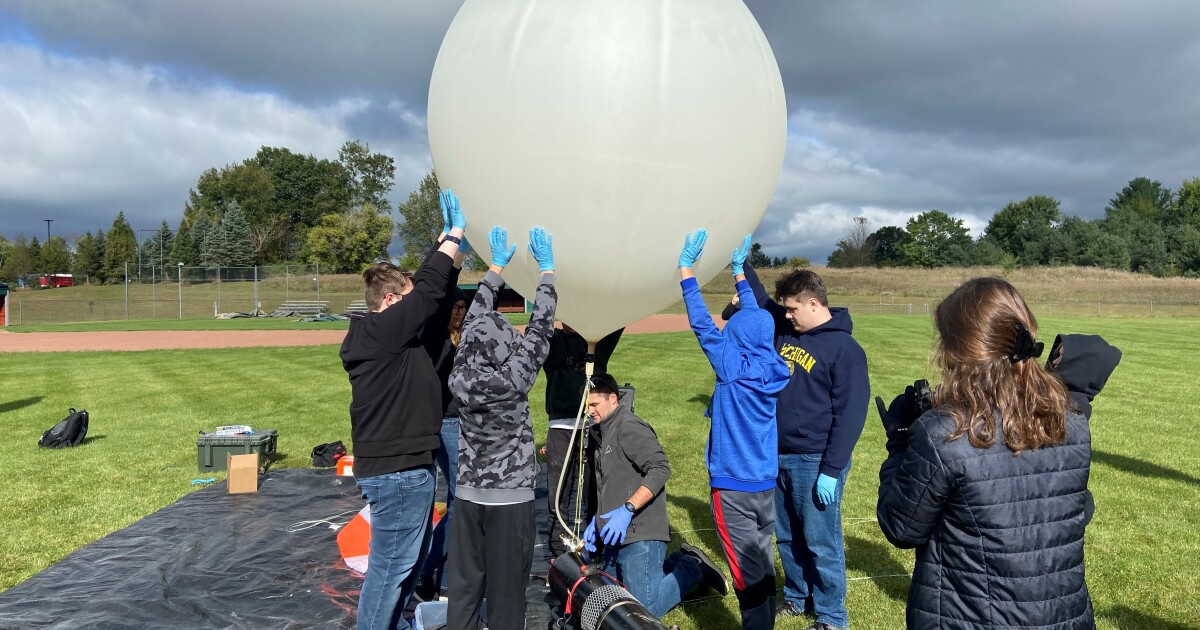 Over the years, students in the school’s Special Projects Lab have built robotic agricultural tools, underwater submersibles, and a model lunar vehicle.

These young inventors always have their heads in the clouds. As WKAR’s Kevin Lavery reports, that’s exactly where they’re taking their latest project.

(LAVERY): When I was in high school, I was obsessed with this mysterious plastic cube whose sides rotated through a seemingly endless combination of colors.

At the time, I didn’t really think about puzzles, permutations and problem theory.

I just wanted to line up the nine colored squares on each side…which I never really got around to doing.

Stockbridge Senior Jack Hammerberg is just as fascinated by cubes as I am. But he’s got one he helped design…and it’s more than just a game.

“It has two cameras and a Raspberry Pi, which is a full-fledged computer inside,” Hammerberg said. “They are data loggers.”

Jack is holding a CubeSat.

This 10 centimeter device is a satellite in low orbit that measures a range of atmospheric conditions: wind, temperature and humidity.

When I met Jack and his classmates, they were preparing to test their CubeSat.

This idea is probably the craziest thing we’ve done to date.

Stockbridge has a long tradition of developing real engineering projects.

The school is perhaps best known for its underwater robotics, which was used to find downed planes during World War II in the South Pacific.

Now the team is aiming for the sky.

Richards helps his students launch their CubeSat aboard a high-altitude balloon.

They will record the data and retrieve it after landing.

Jack Hammerberg hopes their CubeSat will pass its test.

“We don’t know exactly how well it will survive in the upper atmosphere, but that’s obviously the purpose of the balloon at high altitude,” he said. “So we’re really excited to see what kind of data and what kind of results we can get out of it.”

On a partly cloudy fall day in Olivet, a a handful of students kneel on a black tarp, inspecting their gear.

Brandon Pearson directs their pre-flight routine. He is the director of Near Space Education, an Indiana-based STEM organization that helps students get their experiences off the ground.

“We already have all the payloads laid out and we have our parachute with a small balloon inside, so the last step now is to fill our main flight balloon, which is going to carry us up to about 80,000 to 90,000 feet in the atmosphere,” Pearson said.

The team predicts that the balloon could travel as far as Ohio, rising far above the cruising altitude of commercial jets.

Still, authorities need to know what’s going on in the airspace, so Pearson calls Cleveland Airport.

A few more checks and then the moment arrives.

The payload of the Stockbridge balloon remained aloft for about three hours.

It landed intact near Pittsfield Township outside of Ann Arbor, about 80 miles from its launch site at Olivet.

The students are already analyzing their data, including some impressive color photos of the curvature of the Earth.

Just weeks into the school year, the Stockbridge Special Projects Lab already has a lot of work behind it.

The memory of the launch is likely to linger in student Eliana Johnson’s mind for a long time.

“Today, just seeing it all come together and being able to see the finished product and go, ‘we did it,'” Johnson said. “It’s really unbelievable.”

Just seeing it all come together and being able to see the finished product and go, we did. It’s really unbelievable.

But there will be little time to reminisce.

With proven high-altitude balloon flight under its belt, the Stockbridge Special Projects Lab will be hard at work in the months to come.

Their next launch will be a suborbital flight from Wallops Island, Virginia in early 2023.

Their CubeSat will travel 65 miles above Earth aboard a NASA rocket.

And there’s another balloon mission in the works.

Stockbridge students have set their sights on April 8, 2024.

It’s the day they hope to launch another CubeSat over Ohio to soar into the daytime darkness of the next total solar eclipse.