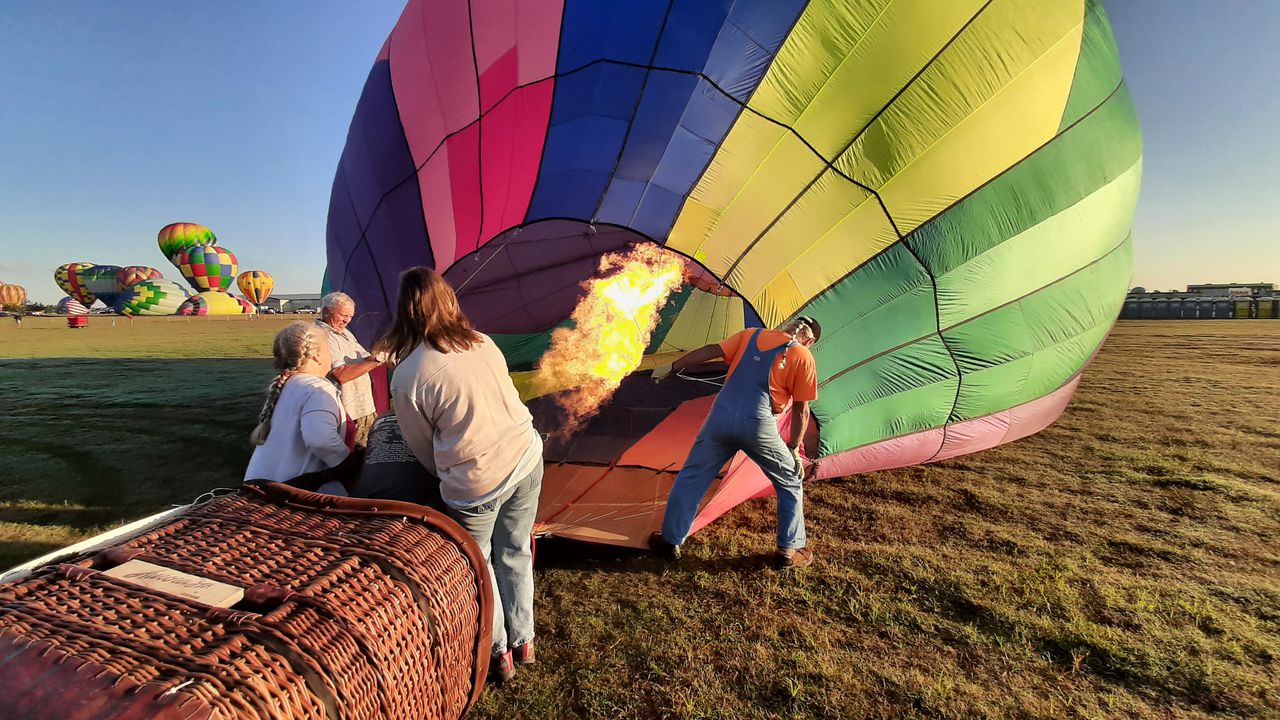 Stokoe, 61, a retired Tampa-area firefighter, was one of more than a dozen pilots setting up their hot air balloons just after sunrise Friday at OWA, Foley’s entertainment complex. The wet ground, of all things, had caused planned demonstration flights to be cancelled: No one wanted to land in a field that had been turned into a swamp by the recent heavy rains. A “static display” of tethered aerostats has been designed to give spectators a taste of what the annual Gulf Coast Balloon Festival will offer this weekend.

Stokoe and his wife, Barbara, joined other teams settling on an OWA ring road. First, the wicker gondolas came out of trailers, vans or, in the case of the Stokoes, a motorized lift ramp in the back of their van. Then the burners were installed. Then the envelopes were stretched on the ground so that fans could be used to fill them with cold air, almost as if they were huge bouncy houses.

And then, finally, with a few bursts of the burner, the balloons rose in a multicolored display of potential flight. Stokoe’s own rig, Knight Rider, was ready to go, its gondola barely dragging on the ground whenever a breeze pushed the envelope, a strong tether securing it to the van.

The friendly conversations and the atmosphere of mutual support between the crews highlighted two things: first, the balloonists get to know each other by traveling from festival to festival, which creates a friendly community. And two, that they’re happy to be back in the skies together after a lost year due to the COVID-19 pandemic. (The Foley Festival, like many others, was canceled in 2020.)

“Look at this lovely new van,” a passerby said as Stokoe stopped the vehicle for a chat. “I’ve had it for a year and a half and I’ve done 6,000 miles on it,” he replied.

There also seems to be a shared interest in passing the sport on to new generations.

Among those who helped the Stokoes settle was Ben Drennan of Georgia, who said Steve Stokoe “taught me how to fly when I was a teenager”.

Steve Stokoe learned from his wife. Barbara Stokoe, who spent years in a professional balloon operating and repair business, said she was drawn to it almost by accident.

“I happened to see a balloon fly once. I didn’t even have a driver’s license yet. I convinced my mom to get in the car and see where she was going. That’s all it took.

The 2021 Gulf Coast Balloon Festival runs Friday through Sunday, May 7-9, at OWA in Foley and will feature more than 50 balloons according to organizers. Throughout the weekend, hot air balloon rides and demonstrations will only take place at dusk and dawn, when conditions permit.

Entrance to the festival is free. Festival tents and most vendors will be cash only.

The festival will be open to the public from 2 p.m. to 10 p.m. Friday with attractions including food vendors, arts and crafts vendors, live music and children’s activities. The captive rides, balloon glow and mass ascension will begin at 7:30 p.m.

For a full schedule of activities, music and other festival features, as well as answers to frequently asked questions, visit www.gulfcoastballoonfestival.com.