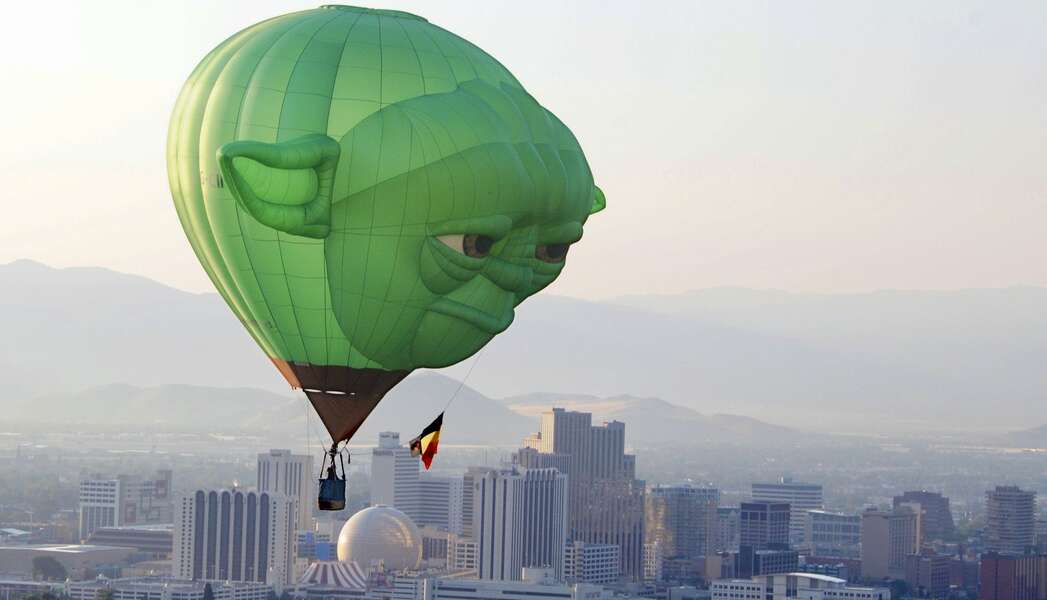 A towering shadow lurks on the rooftops of residential homes in Reno, Nevada, in the form of some sort of round body with appendages, a tail, and – is that a cowboy hat? Looking up, he reveals it’s a gigantic blue armadillo, dressed as a sheriff, in the form of a hot air balloon – and he’s not the only one. There’s also a UFO, an elephant, and a big-headed Tweety bird among the hundred or so colorful balloons that fill the sky.

This spectacle is the typical scene for the annual Great Reno Balloon Race, a three-day event every September (9-11 this year) in Reno’s Rancho San Rafael Regional Park. As the gateway city to Burning Man, Reno is the perfect offbeat scene for such a peculiar gathering. These aren’t just your typical light bulb-shaped hot air balloons; there is also a hot air fish, a hot air sheep, a hot air tiger, a giant puffy sloth on a puffy tree branch, Smokey the bear, a clock with a funny face and a giant head bloated Darth Vader looking a little weird without his body.

“‘Keep Reno Weird’ is a pretty common thing to hear, and it’s something you can feel and be proud of when you’ve been here a while,” says Ben McDonald, longtime resident of the region and communications director of Reno Tahoe tourism. desk. “Community events and the outdoors bring strangers together to experience and celebrate our differences.”

As the largest free balloon event in the world, the Great Reno Balloon Race now attracts 120,000 visitors each year from all walks of life. It started in 1981 with just twenty balloons as a sort of “filler event” between the State Fair and the Reno Air Races, but evolved over the decades into a festival in its own right. As its popularity grew, more and more balloon pilots caught wind of it, some flying quirky aircraft, like Michael Celentano and his “Sheriff Airmadillo”.

“It attracts visitors and pilots from all over the world,” says Charles Harris, President and CEO of Reno Tahoe. “One of the best things about this event is the local love and support. It’s truly a community tradition where visitors are invited to cuddle up with the sunrise and then become part of the event, by helping the pilots on the ground to fly the balloons.

One of the highlights of the event is called Dawn Patrol, when attendees can see the hot air balloons rise from the ground as they inflate, as long as they are awake. The balloons take off at 7am, when morning conditions are usually favourable, so Dawn Patrol is literally dawn, around 5am. To further assist those who may be half asleep at this time, there is the Super Glow Show every morning before sunrise, in which a few of the hot air balloons fly over the park and act as beacons in the sky. dark at dawn with a show of flashing lights set to music.

Sitting with a blanket or chair is one way to experience it all, but for a fee ($110) you can purchase VIP tickets to the Cloud 9 VIP Club, a heated tent in the middle of the pitch serving breakfast caterer, coffee, and even Bloody Marys and mimosas. While the Balloon Festival prides itself on costing the general public nothing, proceeds from Cloud 9 tickets and VIP parking passes help keep the event free for the community.

“We are more than just a hot air balloon event. We work with a multitude of charities in the community,” says Pete Copeland, General Manager of the Great Reno Balloon Race. “For example, we have a 30-year relationship with Washoe County School and The Children’s Cabinet. We like to give back to the community.

September is prime time for hot air balloon festivals across the country.

Then watch the balloons try to hit a target

At 7 a.m. each day, the Great Reno Balloon Race begins when each balloon team jumps into their respective baskets when ready to take off and drops their sandbags to soar into the sky. However, this is not a sprint; it’s all about navigation precision to fly to different targets on the ground, where a giant X literally marks every point.

“Because balloons have no flywheel, pilots navigate to the target by finding winds from different directions at different altitudes,” says Allen Anderson, the race’s competition director. “Competitors receive a bag of beans [a “marker”] with a tail on it as a scoring device. This marker is dropped or thrown at the target. The closest bag wins this task.

With the increasing urban development these days, it is more difficult to physically mark the ground with an X, which is why GPS tasks have been introduced. Balloon pilots navigate to particular coordinates, then simply press a button to drop a virtual marker. However, that is easier said than done. The balloons are always at the mercy of the winds, and sometimes they inadvertently hover over residential homes so close that teams can see what people are watching on TV. Imagine seeing this through your kitchen window.

What it’s like to be a hot air balloon pilot

With her 43-year career in hot air ballooning, Beth Wright-Smith is sharing stories from the sky.

As the winds scatter the balloons across the region until they descend in a rather anticlimactic fashion, so does the public’s interest in gazing at the sky. In fact, the VIP Cloud 9 tent is over at 9:30. The balloon event itself lingers until 11 a.m. with tethered balloon rides for the kids and food, drink and souvenir concessions at “Balloon Boulevard.” But that doesn’t mean the fun or weirdness is over. Outside of Reno’s Rancho San Rafael Regional Park, there’s plenty more to do in this “biggest little city in the world.”

“It’s nose rings and dreads, pants and bow ties, and Harleys and tattoos all at the same table,” McDonald explains, describing the vibe of her hometown.

For a little more action than watching hot air balloons, head to Sierra Adventures to ride up the Truckee River, to float in an inner tube to downtown Reno. For the more daring, there’s the Guinness World Records tallest artificial rock climbing wall on the side of the Whitney Peak Hotel, soaring 16 stories above the iconic ‘Biggest Little City’ arch. of Reno. If you’d rather dress up than climb, there’s the Junkee Clothing Exchange, an almost obligatory stop on the way to Burning Man, where many Burners stop to get their eclectic outfits for the Playa.

Being the closest town to Burning Man, many creative and tangible remnants of Black Rock City are on permanent display in Reno, including Lu Ming’s towering Desert Guard, a stop on the outdoor Playa Art Trail. For more outdoor art, there’s the Self-Guided Street Art Mural Exhibit, located downtown and downtown. Freedom of artistic expression can also be found indoors at the Nevada Museum of Art, which also has Burning Man works, and there’s the Reno Tahoe International Art Show at the Reno-Sparks Convention Center, coincidentally the same weekend as the Great Reno Balloon Course.

Erik Trinidad is a Brooklyn-based travel writer on a perpetual search for offbeat adventures, and the beers and meals that come after. Follow him on Instagram and via his travel/science web series, Plausibly Ridiculous.
2022-09-07
Previous Post: Harvest Wine Festival sees strong attendance at Balloon Fiesta Park
Next Post: The exciting Great Prosser Balloon Gathering takes place September 23-25